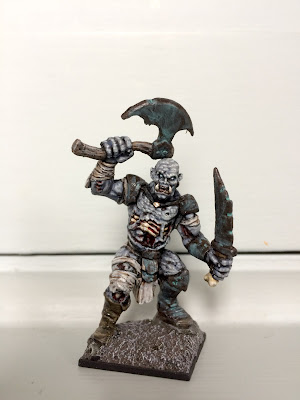 This Reaper Bones zombie ogre is the first of the Hra I have planned for the campaign. I'm not sure if his bared bones and seeping wounds are quite right for the relentless Tekumelani undead, but he'll do. I have a few more in the pipeline, including the Ral Partha "trill" figure that Professor Barker used in his own games, from what I've read. 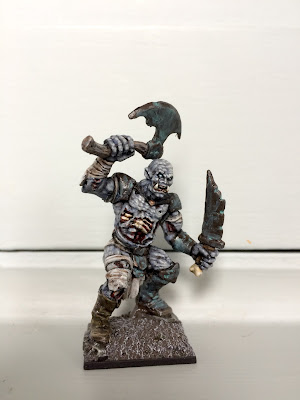 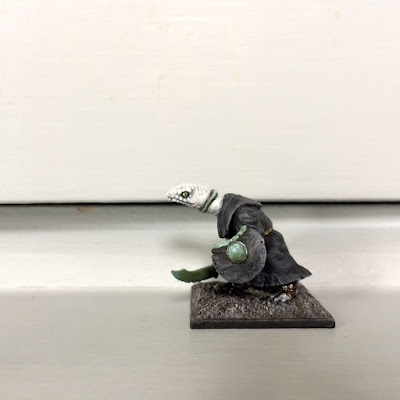 Here's a quickly kitbashed and hurriedly speed-painted Qol. I didn't bother with the tentacle arms shown in the Tekumel illustrations (but not, as far as I can see, mentioned in the text of EPT, etc.). The tentacles are a wonderfully pulpy touch, though, so I might have a go at greenstuffing some in later versions. I think it's a fool's errand to seek utter consistency in one's snake-mutants, though! 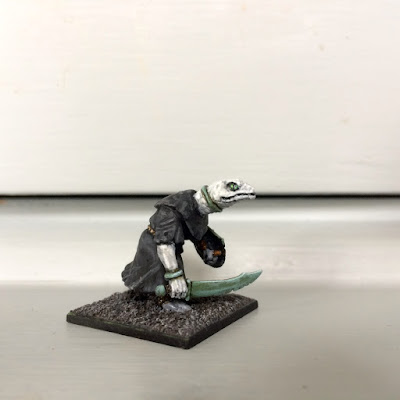 Our lockdown D&D campaign must be about 90 sessions long by now. We've been playing every day with only a handful of skipped sessions over the past three months.

In that time, the players have ransacked the Caves of Chaos, explored Quasqueton, hunted demon-worshippers, saved the Keep on the Borderlands from a titanic and long-buried giant, played off merchant-prince factions against each other in the city of Kalbarad, explored the sewers of said city to break up an illegal orc-fighting ring, stolen a ship, sailed to the Fire Isles and the Far Isles, destroyed the threat of sea devils to shipping, rid the roads of Rothia of non-human bandits, fought off Red Hand assassins, killed the wizard Imrin Sark and - today - toppled his black tower. The wizard destroyed their ship with blue fire, however, thwarting their plan to get rich from trading Rothian wine.

But soon a ship will sail from Rothia to a far, far land and a fabled city called ... Jakalla. One player has found a Tsolyani grammar, and others are intrigued by the prospect of powerful magical items said to be found in the underworld of this city - like the Eye of Advancing Through Portals, which they found on a foe's body. We'll see what they choose to do next ...

Anyway, one side-effect of the campaign's breakneck speed is that I'm now always dredging up half-painted miniatures to finish them off and get fresh foes on the table. I got two red orcs finished in time for yesterday's session and this wizard done in time for today's.

The Essex range of goblins are a little undersung, I reckon. Yes, they're fairly primitive. But they've got buckets of charm. Rather than echoing Tolkien directly, they're more akin to the goblins of George MacDonald's The Princess and the Goblin - which in turn was the ur-source of Tolkien's orcs.

The direct inspiration for the range, though, appears to be Down in the Dungeon.

With his plate armour, this fellow doesn't really belong in Middle Earth. But in D&D, he and his ilk will make a nasty surprise for the party. A mere goblin becomes quite a different proposition once he's acquired a couple of hit dice and armour class 3. 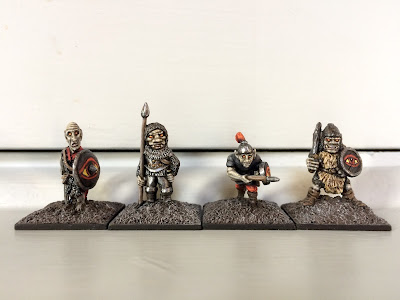 Email ThisBlogThis!Share to TwitterShare to FacebookShare to Pinterest
Labels: D&D, Down in the Dungeon, Dungeons and Dragons, goblins, Orcs, Tolkien 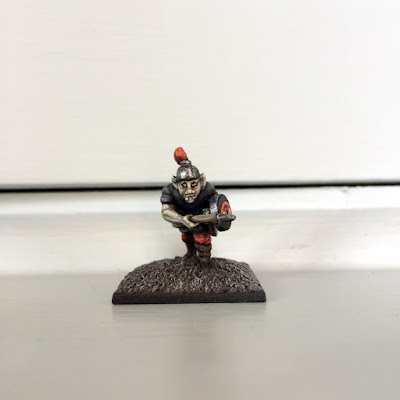 Here's a blast from the distant past: a Minifigs goblin from the 1970s. I've obtained a few Minifigs miniatures recently, and I really like them. There's a certain amount of 'paint your own detail', but they're nice little models - made, I believe, through adding detail to the maquettes with solder rather than with putty. 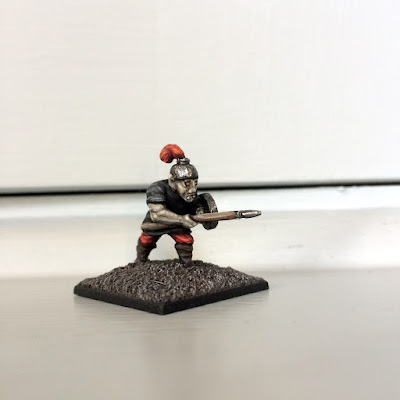 The Minifigs range was closely tied to the original Monster Manual, with the kobolds, goblins, orcs, hobgoblins and gnolls all following that book's illustrations very closely. 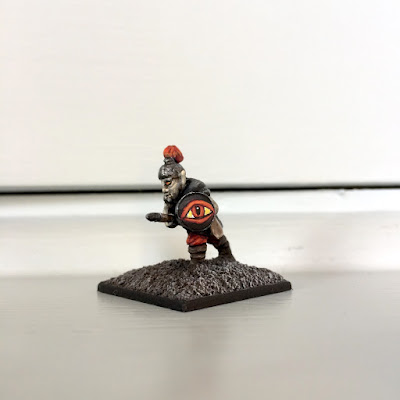 I've painted this one to join my Tolkien orc/D&D goblin project. He's a bit smaller than most of the others, but I think he fits in well enough. 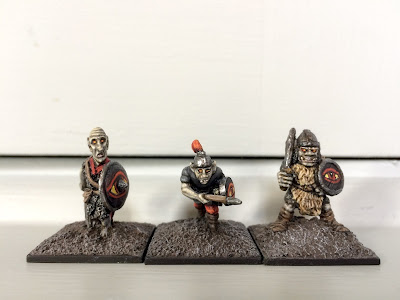 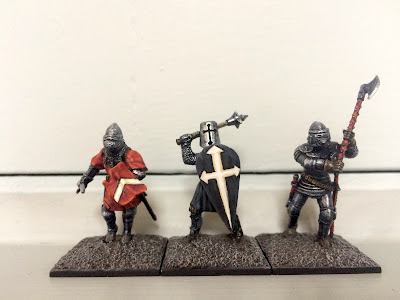 This bunch were a group of assassins on the PCs' tail in our D&D game: two high-level fighters and a cleric of Kahreel the Dagger God. They led an assault on the party's quarters, unaware that an invisible elf had followed their minion and eavesdropped on their planning. Their hired thugs were swiftly dispatched and two of the main baddies were killed after a tough fight. The remaining fighter was Charmed by an elf following a lengthy interrogation and is now his bodyguard - at least until the spell wears off ...
Posted by JC at 03:07 2 comments:

Magic item: the Ring of Pandemonium 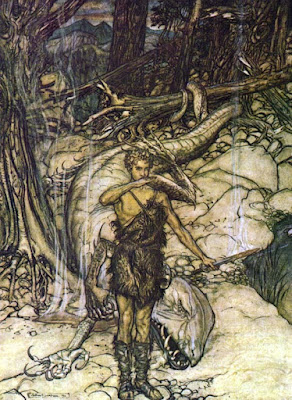 This is a magic item that I recently introduced to our lockdown D&D campaign. As with all the magic items I like to use, its rewards come with risks.

The Ring of Pandemonium is an iron ring that allows the wearer to summon demons to fight on his or her behalf. Knowledge of how to do this comes the moment the ring is put on - and so too does an awareness that summoning demons takes a serious toll.

One demon may be summoned per round by kissing the ring. Each is a 3HD creature with two attacks and immunity to non-magical weapons. It will vanish when combat ends, although it will happily engage several foes in succession. Alternatively, a demon may be summoned to perform a single task (retrieve a captive, fetch an item, etc.). The demon will attempt to do this fearlessly, but may be thwarted in the process.

Every time a demon is summoned, the summoner's player rolls 1d6 and deducts a point - permanently - from the appropriate attribute (STR, INT, WIS, DEX, CON, or CHA). Modifiers are adjusted appropriately. If a stat falls below three, the character is lost beyond all hope of resurrection.

That gives a Moorcockian feel to the ring's use. Like Corum with the creatures retrieved from death by his hand and eye, PCs will be able to slaughter legions of lesser foes with their ordinarily invulnerable summonings. But only at great personal detriment. And the bald explanation in game mechanics causes palpable fear.

So far, this has worked precisely as I hoped. After facing a spectral foe who used the ring to summon demons to fight them, the party were delighted to get hold of it. One negative INT modifier later, they were a whole lot less keen. So now they carry a great power with them that they are terrified to use. That's exactly how I think magic should work. 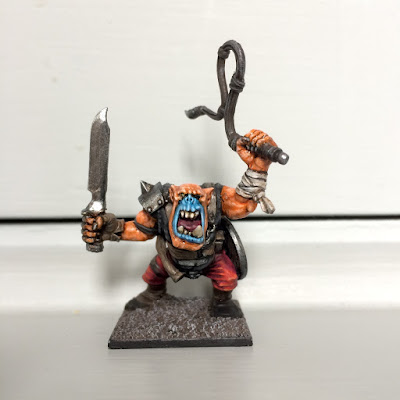 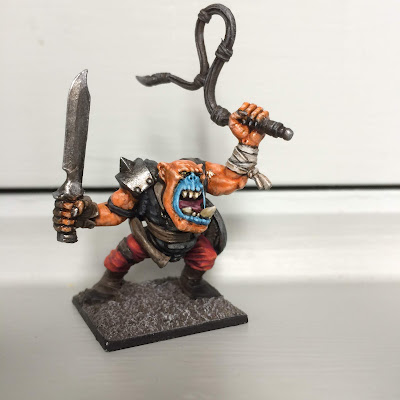 For some reason, the mercy that the PCs showed to certain lizardmen, goblins and orcs was not extended to hobgoblins - possibly because of the stinging defeats that the blue-nosed fiends inflicted on some of the party's early expeditions. 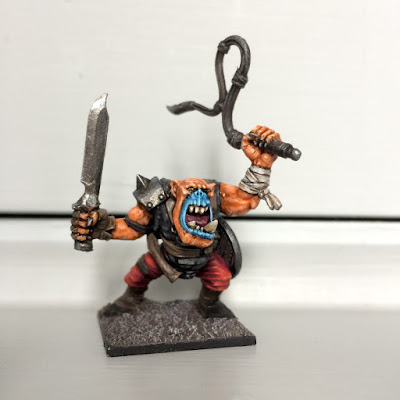 Having cleared the Caves of Chaos, the party has taken to the seas. So I suspect that this fellow will be reincarnated as a slave-driver in some future encounter.

I think these GW orcs make quite good Gygaxian hobgoblins: they've got the right combination of goofiness and menace. This fellow was made from the body of a space ork, the head of a black orc and various other bits and bobs from other kits. 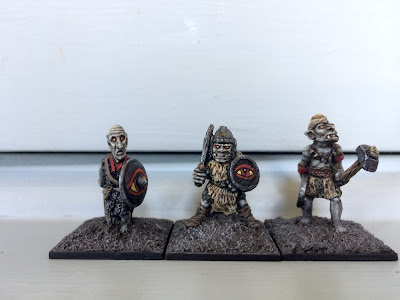 Childhood survivals and impulsive eBay purchases have left me with a large supply of 28mm goblins. Not, in the main, the zany, impish, smirking goblins that became popular from the later 1980s, but nasty, fearsome orcs. They're goblins in D&D terms of course: the goblins of the Monster Manual are essentially Tolkien's orcs while the pig-headed beastmen of that volume take their name and tribal affiliations from Tolkien but very little else.

In Middle Earth, of course, orcs and goblins are the same thing. The Uruk-hai are just as much goblins as the smallest snaga. Indeed, in the text of The Lord of the Rings, Uruks are described as "goblins" more often than are the smaller types.

Early manufacturers of fantasy miniatures recognised this, probably because they were drawing on The Lord of the Rings directly rather than on derivative materials. So Ral Partha's Wizards, Warriors and Warlocks range featured "Giant Goblins" who were clearly the Uruk-hai of Isengard - complete with the White Hand on their shields and the S-rune on their helmets. They are a little bigger than the other goblins in the ranges, but are still squat, short creatures. And that's as it should be: it's clear from the text of The Lord of the Rings that Uruks are significantly shorter than Men - which is what makes the half-orcs (described as Men rather than Orcs) so remarkable.

Anyway, given all the goblins that I have kicking around, I thought I'd kill two birds with one stone: create a wargaming army of Middle Earth orcs and amass a huge supply of goblins for D&D. So I'm painting all these goblins from diverse manufacturers in the same simple style. I'm basing them all on 25mm squares so that they can be used in common-frontage wargames (MicroHotT, Book of War, perhaps Oathmark). Although that's 5mm wider than the traditional 20mm, a lot of these figures occupy the space quite nicely, as they're "squat and broad" (matching Tolkien's description of the Uruks at Helm's Deep). 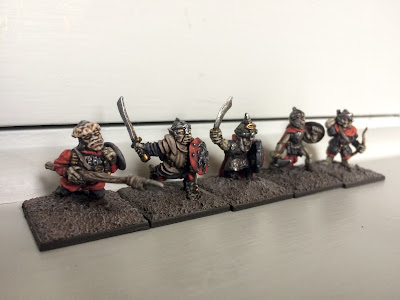 There are a few goblins I'm throwing into this project that aren't really Tolkienesque - like this Metal Magic 'red goblin' with his hammer and sickle! But he'll work OK as a goblin smith or something in D&D.

For the colour scheme, I wanted something that would broadly fit both Tolkien's descriptions and those of D&D. Tolkien's orcs are 'swart' and 'sallow', but they should also look appropriately subterranean. D&D goblins have livid skin in grey or earthy tones. I started with a grey base, washed it in sepia and then highlighted it in grey, buff and Vallejo's Pale Flesh. I think the end result reasonably covers all bases: they're sallow, thanks to the buff, and could reasonably be described as 'swart' too.

For the eyes, I went with a glowing red/yellow. This fits with D&D's 'glowing red eyes', but is perhaps stretching Tolkien's only description of orcish eyes as 'like coals'. When I was a child, I read this as indicating that the orc's eyes were glowing like red-hot coals, but that's clearly not the only reading. The eyes could be coal-black or simply burning with rage or malice. Still, eyes like glowing coals is still a valid interpretation, and it fits with the orcish ability to see in the dark. So I'm content to go that way. What I'm still not sure on is whether to give them pupils. I'll make a decision once I've got more done.

As far as liveries and heraldry go, I'm going with the Red Eye where no other emblem is present. Where there's a White Hand, or where one looks appropriate, I'll use that instead - and cheerfully mix them together until I have enough Isengarders to work separately. The Citadel Fiend Factory goblins have a wolf emblem, so I'm painting that in red and black to fit the description of goblin banners being red and black at the Battle of the Five Armies.