Hell ain't a bad place to be 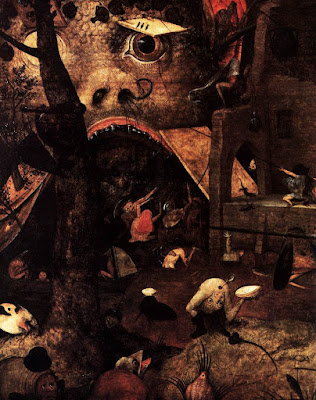 This follows on from the previous post. If the underworld into which your players venture is actually Hell, there are some interesting implications. Humanoid monsters become minor devils - which is often what goblins are in folklore - and encounters with the animate dead require no explanation - because the Underworld is where you go when you die.

I want to expand on that last point. It provides an excellent rationale for encounters with old friends - and old foes too. Think of Odysseus meeting the shade of Agamemnon - or fearing to encounter the head of Medusa. Or think of Dante's encounters with Minos, Cain and the Minotaur, among many others.

That sort of thing is great in a campaign, because recurring elements are really all that makes a campaign better than one-off scenarios. And the return of a long-dead enemy is always going to add spice. That's especially true if the villainous NPC is now a demon rather than merely a shade.

There's a good example somewhere in Michael Moorcock's multiverse books. Yyrkoon, Elric's treacherous cousin, reappears in the Corum saga as a demon (I think his name is spelt Yrkoon this time, but it seemed clear to me when I read it that he was the same entity).

For the GM, this offers up interesting possibilities. It gives you a supernatural means of achieving an arch-foe's return. And, as demonhood is probably not exactly fun, it gives that arch-foe extra motivation to conspire against the PCs. But it also allows the PCs to see that arch-foe consigned to some (literally) hellish task in the underworld. Perhaps the leader of the local usurper's armies is now reduced to marshalling goblins in the upper levels of the underworld. Or maybe that evil sorcerer is now pursuing his goblin-human hybridisation project with a much bigger budget. Or perhaps he's the person that the PCs have to negotiate with to achieve passage to a certain section of the underworld. If they're responsible for consigning him to the netherworld in the first place, that could be especially awkward ...
Posted by JC at 05:26 No comments: 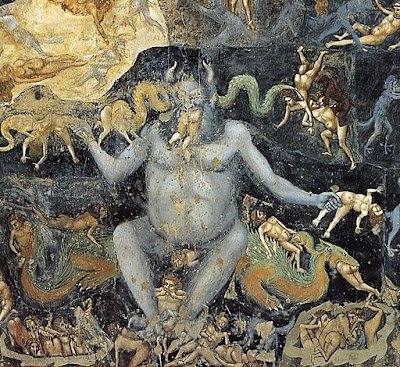 I've been doing a bit of genre-fantasy slumming by reading Michael Shea's Nifft the Lean. It's quite the most D&D book I've read - but in a good way; I loathe books that read like, or actually are, write-ups of someone's campaign.

Nifft has much to recommend it. The influence of Jack Vance is clear; Shea's first novel was a Vance-approved follow-up to the Dying Earth sequence. And Shea isn't as good as Vance at the Vancian stuff - all those Wodehousian wizards and disdainful potentates. But Shea's stuff has attractions of its own: principally in its gruesomeness and its monsters.

The book contains four novellas. I'd read one or two of them a few years back, but they repaid rereading. The first and the third both involve descents into the underworld. And this is where it gets really interesting for the RPG-minded. For Shea's underworld is truly hellish:

There were huts with door-curtains of strung teeth still chattering from the denizens' quick hiding. (I alone heard their rank breathing within, and the groans of their tightly muffled victims.) There were ghoulish smithies too, where toad-bodied giants hammered smoking limbs onto struggling souls stretched on anvils, and other shops as well where similar giants with pipes blew screaming dwarves into being from cauldrons of molten flesh. There were rat-men struggling in thickets of tarantula weed, and there were groves of dung-bearing trees with twisted trunks, translucent like gut.


But what a setting for adventure!

Now, I know that the "dungeon as mythic underworld" has been kicking around the internet for many a year. But while Philotomy's musings are wonderful, I think that to confine the mythic nature of the underworld to an absence of infravision, doors that close by themselves and a generally inimical environment is to miss the obvious point about a mythic underworld: it's Hell.

Once you accept that your adventurers are delving into the upper reaches of the Inferno, everything starts to make sense. Of course the place is crawling with the walking dead - it's where you go when you die. And of course there are goblins, hobgoblins and orcs: minor demons who merely hint at the greater dangers of the deeper levels. Elf-hills and dwarf-caverns are almost certainly the upper reaches of the Infernal regions too.

There's plenty of resonance in this. Odysseus adventured in the underworld, as did Heracles. And so did Orpheus and Aeneas and Gilgamesh. Indeed, the descent into the underworld - katabasis - is a staple of heroic narratives.

And best of all, as with Shea's underworlds, no nods to realism are required. Your guides here are Milton and Dante and Giotto, Breughel and Bosch.

Combat systems as a last resort

This is a question I often think about: why isn't the best skirmish-wargame system also the best RPG combat system?

There are some obvious answers: realistic skirmish systems are too dangerous for continuity in a typical D&D-style game; and skirmish systems don't allow for the sort of madcap creativity that's a staple of a decent RPG encounter.

Let's take that second point. Creative solutions to problems are where much of the fun in RPGs arises.    And the more that creativity leaks into combat encounters, the better. When I was a kid, I disliked the D&D combat system as a sterile mix of abstraction and attrition. Why not prefer RuneQuest or Warhammer FRP, where hilarity and dismemberment often arose from a humdrum fight? Since then, I've come to appreciate the D&D approach more - for its ease of bookkeeping and the tension that hit-point-depletion creates. But I wasn't entirely wrong. D&D combat can devolve into a sterile exercise in whittling hit points.

That's why the combat system should be the fall-back option. The GM should always allow players to  fight through methods that don't involve armour class. Will mechanics be involved? Yes, of course: there's an element of chance. But not usually combat mechanics.

Here's an example from our most recent game: a one-off, highly derivative scenario involving dwarf PCs reclaiming their ancestral home from invading evils. At one point, the dwarves triggered an alarm that animated a gargoyle and summoned hobgoblins from deeper in the dungeon. As the hobgoblins closed with some of the dwarves at the top of the stairs, one player asked if her character could throw herself at the legs of the nearest hobgoblin. Basically, she wanted to rugby-tackle him down the stairs.

That seemed entirely reasonable, given the positioning, so I offered her a DEX check with disadvantage. Failure would result in injury to her character from the hobgoblin, and a fumble would send her tumbling down the stairs herself. But if she succeeded, she would topple the hobgoblin, driving him out of the combat and hurting him the process. She rolled the two d20s, succeeded on both and smashed the unfortunate hobgoblin down the stairs, breaking his neck in the process (a high damage roll).

This was a simple snap decision, and I'm sure most GMs do that sort of thing all the time. But I think it's worth highlighting how much more interesting and dynamic combat encounters become when there's no automatic default to AC and to-hit-rolls.

Simple stat checks, along with the disadvantage and advantage system, is all you need for this. Here are some of the things that have come up in our games:

Of course, monsters and NPCs can attempt all these things too.

When the AC/'to hit'/HP grind becomes the last resort rather than the first, the game becomes a hell of a lot more entertaining. And it gets faster. You don't need to cross off some of an orc's hit points if he's just been barged into a gaping chasm - or persuaded to charge into a troll's lair.

Noisms has just posted a typically thought-provoking blog on books: "Before the printing press, books were rare".

It's an excellent point. Here are some of its implications for your typical pseudo-medieval (or pseudo-ancient) RPG setting:

1. Books are treasure. Noisms notes that they're "rare, special objects, almost unique and very expensive". Indeed: and they're the best sort of treasure from the GM's perspective, because they're heavy, fragile and not immediately useful. You might be able to sell one in a big city, but you can't bribe an orc with one.

Discover a wizard's library in his tower, and you're potentially very rich indeed. But first you have to get the books to somewhere you can sell them. And that could be tricky. In a game with a decent encumbrance system, loading up with books means abandoning weapons, armour or other equipment.  And it also means taking great care with water hazards, fire and slime of all kinds.

2. Books explain dungeons. Libraries are treasure-houses. That's why wizards need (or breed) hobgoblin guards. Non-human minions are a rational choice for your average sorcerer, because they probably can't run off to the nearest big city to sell a few volumes for a fortune. And the value of books is why libraries are often located underground and guarded by both monsters and traps.

3. Books are magic. My old English teacher used to delight in the etymological link between read and riddle. "Reading is magic," he would say. "You can pass someone a note and make them pass out. Imagine how that looks to a people in a preliterate society."

Let's extend that. I have a deep suspicion of standard spell lists and even the magician as player character. But what if magic is simply literacy? What if a character who can read - most can't - can use grimoires or scrolls to cast spells - provided that character can read the (often archaic) language in which they are written?

Some of these formulae can be memorised, perhaps, but that's exceptionally difficult. [A player might be presented with some lines of Old English verse - or a Hungarian or Turkish poem, perhaps - and asked to learn and recite it.] So it's better to carry a spell book around if you're adventuring. But then those books are vulnerable to fire, water and theft. That's what makes adventuring such a difficult business ...
Posted by JC at 16:36 1 comment: