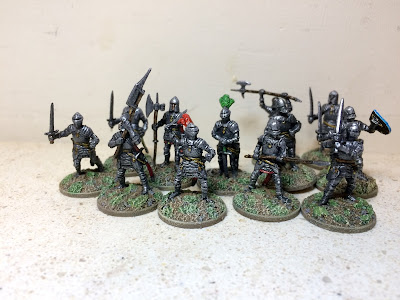 A dozen quick 1/72 knights to finish the year. They'll probably need a touch-up when the festivities subside ... 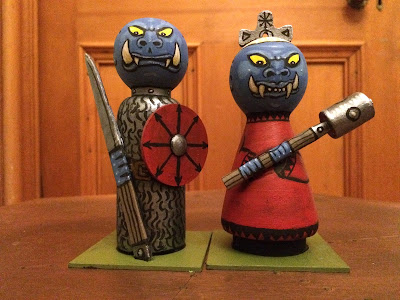 Inspired by the marvellous BluePeterHammer blog, I got my daughter some unpainted peg dolls for Christmas, along with a book on their construction and painting. Last night after we'd wrapped all the kids' presents, I decided to paint a couple of outsize pegs up as giants. I based them for Hordes of the Things, as behemoth elements. 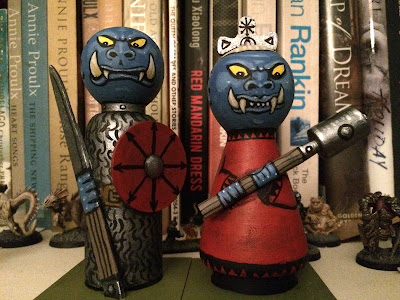 Both they and the raw materials have gone down well. My son has already built a Mandalorian out of a purloined peg, and both kids and I are going to put together a couple of full HotT peg armies over the holidays. 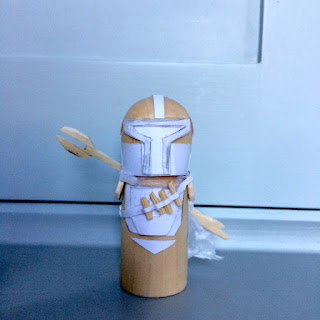 They're not quite toy soldiers from The Nutcracker, but they're seasonal enough, I think. 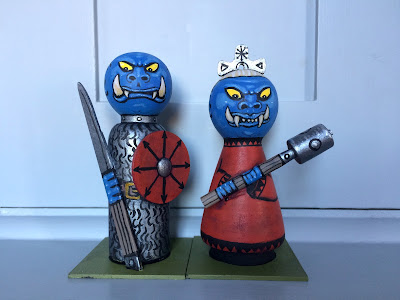 Email ThisBlogThis!Share to TwitterShare to FacebookShare to Pinterest
Labels: Hordes of the Things, peg warriors 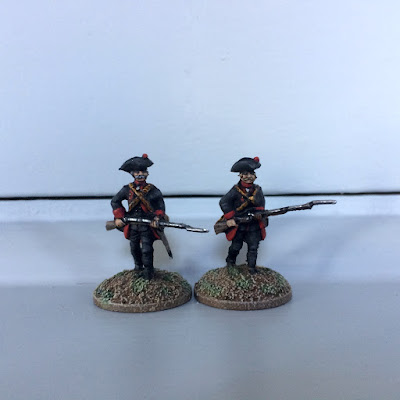 Rushing to the rescue or providing impediments to PCs: any fantasy city needs its guards. These fellows will represent the authorities in the big game of Into the Odd I'm running in a couple of weeks. When I've got 12 painted, they'll also form a unit of Heavy Missiles with Venomous shooting in Dragon Rampant - or perhaps I'll plunder The Pikeman's Lament for proper musket rules.

While the guards are Seven Years War Austrians from HaT, the next miniature is a Strelets bashi-bazouk. Although they've enjoyed a long afterlife as an insult hurled by Herge's Captain Haddock, the historical bashi-bazouks were irregular Ottoman soldiers paid only in plunder - a close analogue to RPG adventurers, in other words. Murderhobos especially: the bashi-bazouks were responsible for some heinous atrocities in various campaigns.

They also cut quite a dash, as the Orientalist paintings of Jean-Léon Gérôme and Stanislaw Chlebowski make plain. And they were always armed to the teeth. This fellow will work well as a PC or perhaps an NPC brigand. 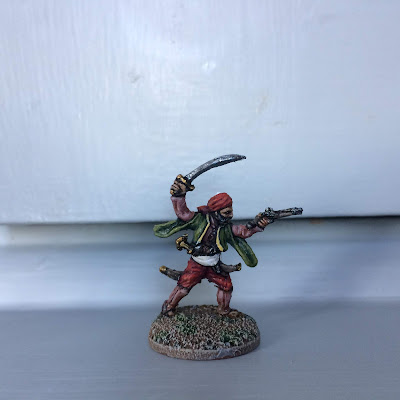 I also added to the dangers of the Underworld in this scale with a very quickly painted stone golem from Reaper Bones. A bit of a handful for either guards or adventurer, I suspect ... 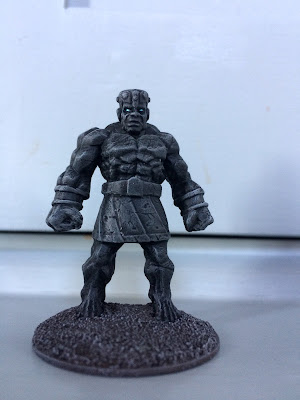 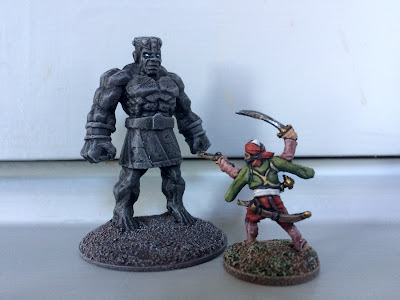 Email ThisBlogThis!Share to TwitterShare to FacebookShare to Pinterest
Labels: 1/72, Dragon Rampant, Into the Odd, speed painting

Into the Odd - the best RPG for kids?

We had friends staying last weekend. After introducing their kids to Song of Blades and Heroes last time they were up, I'd promised my kids that we'd do a bit of roleplaying with them this time. So, after a jaunt up the hill on Sunday, we settled down for a spot of dungeon-crawling.

I'd planned on using Whitehack or the Black Hack. Then I thought about one of the fantasy variants on Into the Odd. But then I decided just to use Into the Odd itself. And I'm very glad I did: it made for the perfect introduction to RPGs.

Why? Well, the game's loose setting and brilliant character-generation system made for a very easy set-up. We rolled characters, and then the kids chose miniatures to represent them from the Cabinet of Shame. That gave us a space marine in corroded bronze armour, a 'space monkey' and an orc with an axe that fairly approximated the shovel in the player's 'starting package'. And that eclectic mix worked just fine as we laid out dungeon tiles and explored the underground complex I'd sketched out half an hour earlier.

The scenario was simple: the PCs were desperadoes, short of cash, and the authorities had put a price on the tentacled head of an evil sorcerer. So the PCs were raiding his underground fastness. No other background was needed.

And we had a blast. The new players grasped the concepts of ability saves on a D20 very quickly. And the no-messing combat (rolling damage, with no time wasted on fripperies such as rolling to hit) was equally clear - as were its risks.

But best of all was the way that the players instinctively made use of their starting equipment (determined by cross-referencing a character's hit points and highest stat on a table of 'packages'). One character had a pistol, a smoke bomb and some wire. Another had a dog, a pistol and a shovel. The use of this limited gear led to all manner of interesting situations. Best of all was the final encounter with the octopus-headed wizard. The PCs filled the chamber with smoke, then dashed down the stairs to improvise a trip wire. They pulled off their rolls, swiftly dispatched the fiend and made off with this head. The dog, alas, did not make it out, but all of the PCs did, though only by dint of a couple of successful saves to avoid critical damage.

I ran another session on Friday evening for my son and one of his schoolfriends (both RPG veterans). This time, we played through The Iron Coral, the introductory adventure that comes with the rules. With most of the 'dungeon' explored, both characters met a sticky - but undeniably fitting - end. This time, I was struck by the speed at which the game runs. We played it quite a bit last year, but I'd forgotten quite how quick and decisive combat encounters can be, and how much time that frees up for exploration and role-playing.

Of course, games in which combat is a game in itself can be tremendous too. We've played The Fantasy Trip a lot this year, and it's excellent - because every time there's a fight, you get an engrossing board/skirmish game to resolve it. And in TFT, every fight can be deadly for the PCs, which adds tension and suspense even if the party are just facing a few goblins.

For games in which all players are familiar with the rules, TFT is tremendous. And its rules are clear, logical and relatively simple, which helps. It's also perhaps the best RPF for very large parties, because the tactical aspects of fighting give everyone lots to consider as you go round the table.

But for smaller games in which the players are not familiar with all the combat options they can take and just need a sense that "fighting is dangerous", Into the Odd is very hard to beat.

And as an introductory game for kids, it's the best. Start with a pistol, a smokebomb and a length of wire - and watch as imagination does the rest.