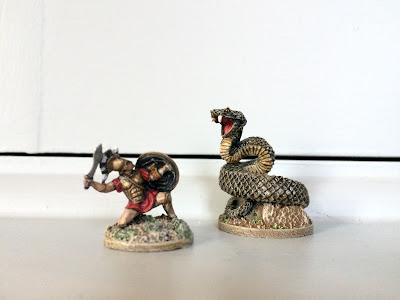 This was a ridiculously quick paintjob using GW's contrast paints over drybrushing. Nothing fancy, then, but he looks suitably generic - something that's useful for RPGs where the same threats might be encountered more than once in a given area ("The ruins are infested with serpents of great size ..."). 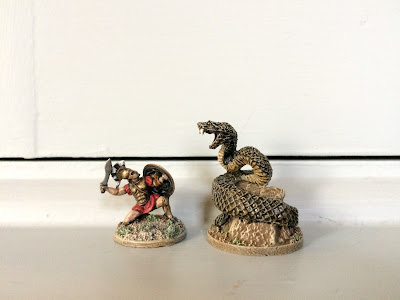 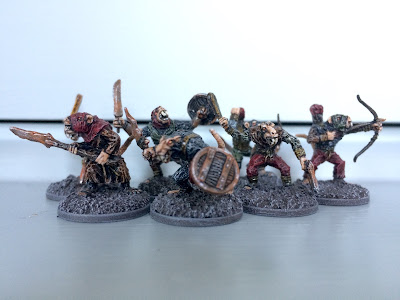 I painted these Caesar ratmen over the weekend. They're remarkably quick to paint, being scruffy and presumably dirty, and the Caesar soft plastic holds paint extremely well.

A few years ago, I painted another dozen or so. Initially, those were based on square Warhammer-style bases to serve as "lesser ratmen" alongside 28mm Skaven in Song of Blades and Heroes. I then  rebased them on pennies to serve as large (gnoll-ish) monsters in a 15mm RPG campaign. And more recently, I rebased them on Hordes of the Things element bases, reasoning that they could work with both 15mm and 28mm figures as either a warband of big creatures or one of small but vicious ones.

Now, though, I'm thinking about rebasing them again to join this batch. It wouldn't take long and would give me plenty of RPG baddies and two full Dragon Rampant units (six scouts and 12 light infantry or fierce foot).
Posted by JC at 05:48 2 comments: 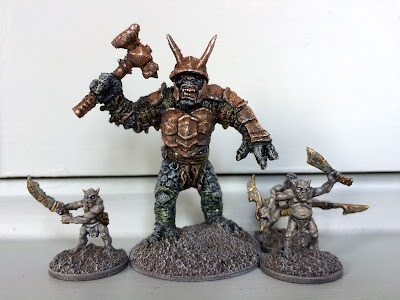 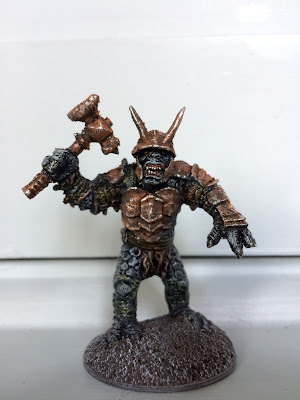 Email ThisBlogThis!Share to TwitterShare to FacebookShare to Pinterest
Labels: 1/72, trolls 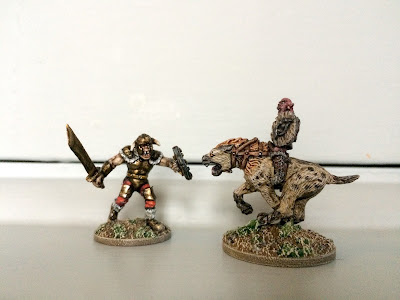 Here's a Caesar orc and a Dark Alliance one, the latter mounted on some sort of hyenadon.

I'm having a go at painting up the Caesar orcs as some sort of subhuman Bronze Age marauders: Fomorians, perhaps, or Gloranthan Tusk Riders (dismounted). 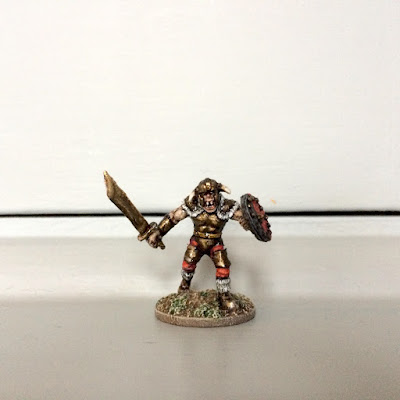 The nice thing about 1/72 is that you get lots of duplicates in a pack. That creates scope for creating several warbands from the same box, each distinguished by a different paintjob.

I wonder if the Caesar orcs might also work as Gloranthan dark trolls, if painted appropriately. They're roughly the right size (7' if they stood up straight). At this scale, the niceties of muzzle length are less of a problem than they would be in 28mm. 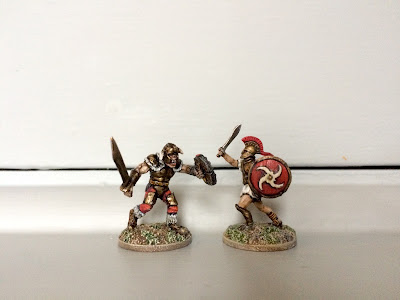 The hyena rider is the first of several. I painted him ages ago, but only got round to the base last night. 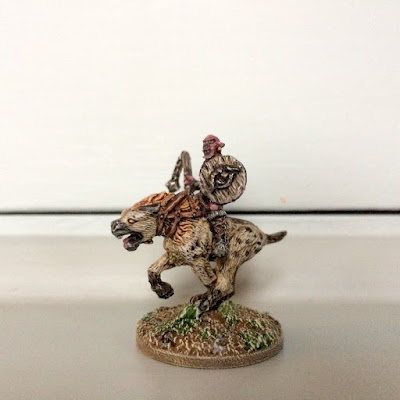 A key advantage of 1/72 is the ability to get cavalry done relatively quickly: our 28mm forces boast only a handful of wolfriders and the odd dinosaur rider among hundreds of infantry. So I'm increasingly looking to 1/72 for Dragon Rampant and Of Gods and Mortals and similar games. 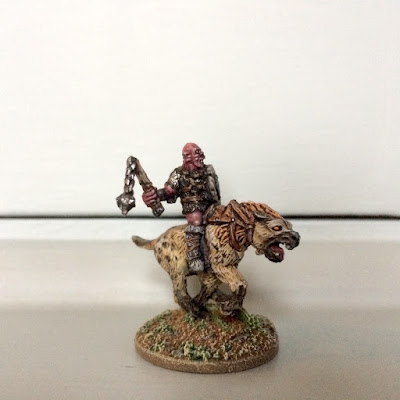 All RPG encumbrance systems are rubbish ... 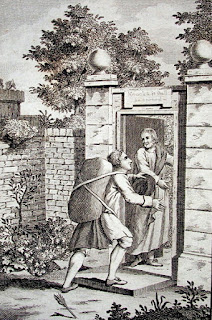 ... or at least that's my experience with them.

Why? Because even with the simplest, smartest or most intuitive rules, the system always - always - gets forgotten in the heat of the game. Perhaps I'm an outlier here, but I've never known any group of players to adhere to encumbrance rules - or even to remember them. I've certainly never managed it as a player.

But I don't think it really matters as long as the GM asks one question whenever a physical challenge presents itself. That challenge might be crawling, climbing or combat, but the question should always be this: what do you do with your stuff?

A central failing in many encumbrance systems is that they're trying to do two different jobs at once. Many systems grossly underestimate how much a strong, fit character should be able to carry in the wild for days on end. At the same time, they often overestimate how much the same character would be able to carry while still being unhindered in hand-to-hand combat.

The two situations are very different, so it's unsurprising that it's hard to cover them with a single system. How much stuff can determined travellers carry through the wilderness? Lots. How much stuff can those travellers keep about their persons and still fight unaffected? Very little? Hence the question: what do you do with your stuff?

The answer will tend to be variants of "We discard some of it" (for climbing, crawling and the like) or "We dump it" (for fighting). So it leads to resource depletion in the first case and an extra dimension to combat in the second. Each of these adds interest to the game.

If PCs discard some of their stuff, they're creating an obvious trail for anyone who might be following - unless they decide to conceal the abandoned gear. But if they do that, they're depleting both their resources and time. They might also be drawing predators to their trail if they abandon edible items (which might not be limited to food: remember the rust monster!).

And if they dump some of their stuff for a fight, they immediately create a more interesting tactical situation. The best RPG fights tend to resemble engrossing skirmish wargames, with much more to consider than merely rolling to hit. And, as any seasoned skirmish gamer knows, the best skirmish games tend to involve objectives beyond simply killing the enemy. A pile of hastily dropped supplies and loot immediately creates objectives for PCs and enemies alike. All of a sudden, manoeuvre, push-backs and retreats become much more important. And that's something that the GM should exploit to the full.
Posted by JC at 16:36 12 comments: