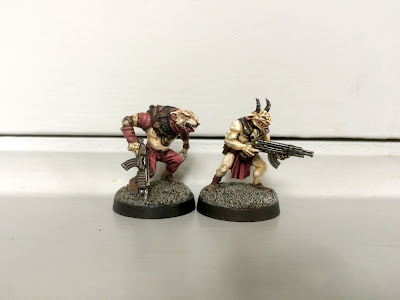 Here's the second beastman for the cult. Two down, just another 22 needed for a full complement of insurgents for The Battlefield. 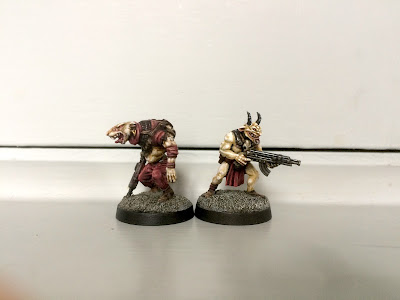 A quick kitbashed beastman and The Battlefield 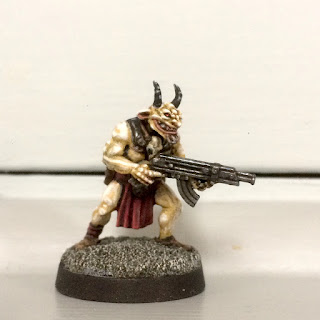 I very much liked the look of Hekatoncheires' inventive beastman warband, and it inspired me to do a bit of kitbashing. I've kitbashed lots of beastmen before, but I thought I'd do some with a science-fantasy slant to got with our current tabletop wargaming. And I thought I'd take a tip from Hek in employing a similar colour scheme for a diverse band of creatures.

We've played a few garden games of Brent Spivey's The Battlefield recently, and it's great. All of Brent's games are brilliant - Rogue Planet, Mayhem and Havoc are the others we've played - and they're all brimming with inventive mechanics.

The reason we haven't played them more is that 'time to table' can be a bit daunting. Because the rules are so fresh and innovative, they tend to need a full read-through if you haven't played for a while. There are lots of acronyms and initialisms (RAT, MAD, CQ, etc.), and I wonder if the rulebooks might be more user-friendly if those were just 'Shooting', 'Melee', etc. And because Rogue Planet and Mayhem are 'create your own profile' games, there's a bit of extra time involved that can weigh against getting a family game going on a whim.

The Battlefield, however, avoids the last of these problems as troops fall into set categories, over which a layer of customisation ('loadouts') can be applied. (Havoc is similar, but suffers from an overlong and roughly edited rulebook - a shame, as the game itself is terrific. If ever a ruleset demanded a second edition ...)

Now, the thing about all of the Spivey stable is that when you actually get the games on the table, they play intuitively and fluidly. They're full of tactical decision-making, drama and fun. Perfect games, in other words. So perhaps the trick is just to keep playing them, so that you don't forget the rules in the interim!

One of the troop categories in The Battlefield is 'insurgents'. Perfect for a warp cult or Red Redemptionists or something similar. I'll need four lots of six, eventually: this fellow is the first. 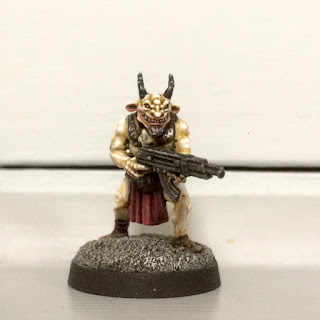