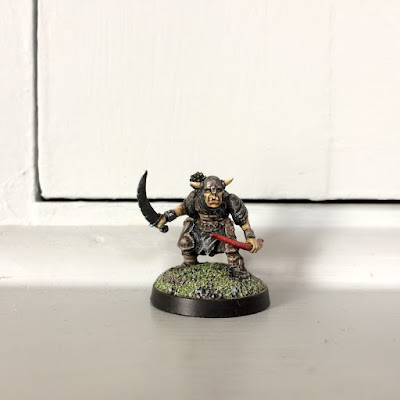 Although I've never done any Middle Earth wargaming, I'm often tempted by it and always on the lookout for suitable miniatures. Those can be surprisingly hard to find - especially, perhaps, when it come to Orcs.

The fairly recent release of the Oathmark goblins changed that a bit; they're very nice Tolkien-esque figures, and wolf-riders are apparently to follow. But the only problem is that they fill only one of the two main Orcish slots in Tolkien's writings: that of the Uruks.

In The Lord of the Rings, goblins are broadly divided into two classes: the big fighting goblins (the Uruks) and the lesser kinds (whom the Uruks call "Snaga", meaning "slave"). The Oathmark goblins, being somewhat shorter than Men but still fairly large, fill the Uruk role perfectly (you might want to change the swords and bows for Isengarders). 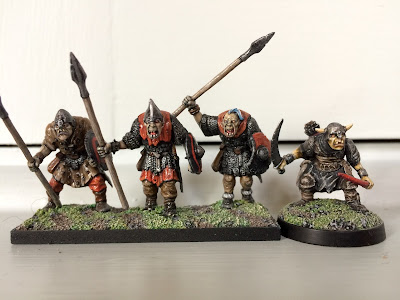 But the smaller types must be closer to Hobbit-sized, because Frodo and Sam are mistaken for them when suitably disguised.

So I was pleased to discover that Oathmark heads and arms fit rather nicely onto Mantic goblin bodies. The Mantic goblins are much worse than their other lines - indeed, notoriously so. The beaky heads have a certain charm, but the arms are poorly cast and don't fit terribly well on the bodies. The Oathmark appendages solve that problem at a stroke. 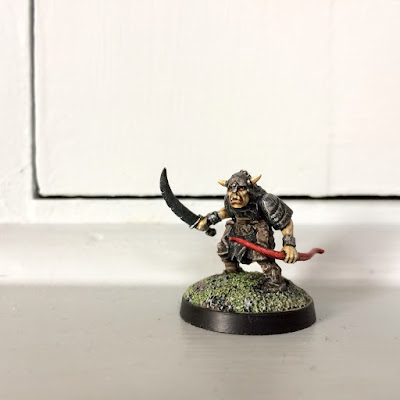 What's nice about this is that the Oathmark goblins come with lots of extra heads and limbs, because each sprue allows for the assembly of its component Orcs as archers, spearmen or swordsmen. So by buying some Mantic sprues to go with the Oathmark ones, you can assemble five Uruks and five Snaga from each. 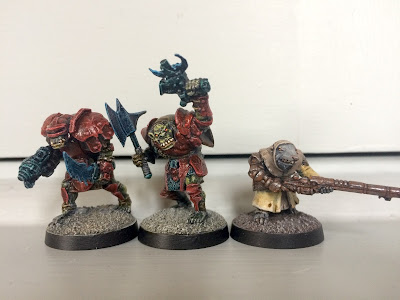 A forthcoming game of Xenos Rampant with some friends has got me scurrying to paint up some more regimented sci-fi troops than my typical rag-tag scum and villains. For these Mantic orcs, I used my new speed-painting method: Citadel contrast paints over black undercoat drybrushed with grey and white. 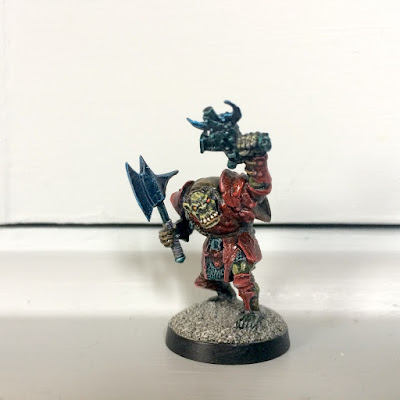 They're not terribly pretty close up, but they'll make a nice red-armoured horde en masse. And they're very, very quick; if you exclude drying time, I'd say that they take longer to assemble than to paint. 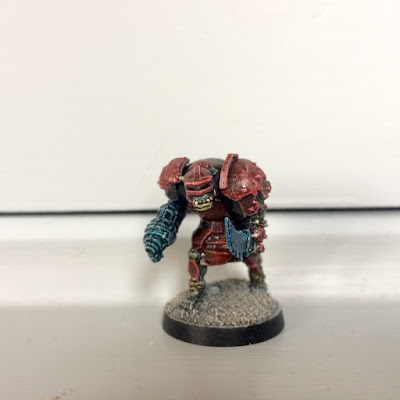 I might add a few details to them here and there once each squad of 12 is finished, but the aim for now is to get a few dozen done to this standard. These two are the first of six; the other four are done barring the bases. 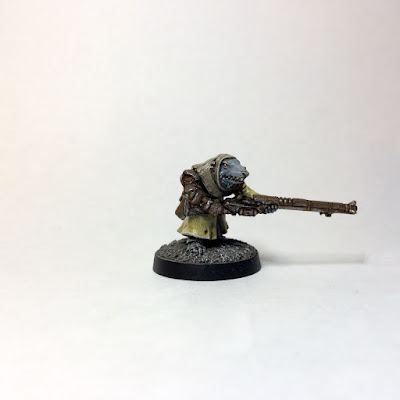 The ratman is a GW plague monk with Skitarii arms and weapon. Six of these will form a unit of 'recon infantry'. I've based them to match my fantasy ratmen, so that they'll blend in with those (I'm going to do some with the same blue-grey hide as this one, so that they can all work together).

Both lots will doubtless end up as encounters in fantasy RPGs and feature in Mutants and Death Ray Guns and the like too.
Posted by JC at 04:56 No comments: 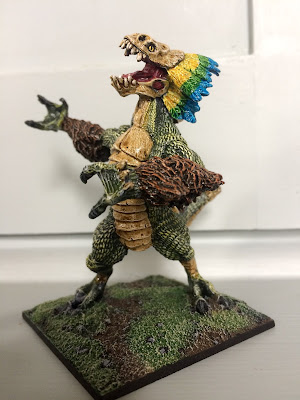 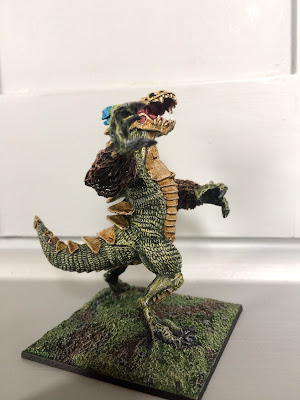 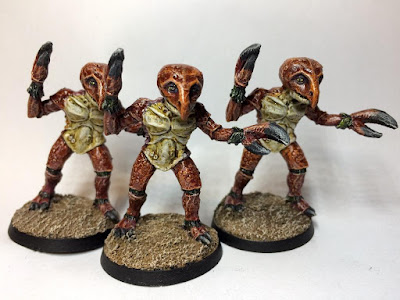 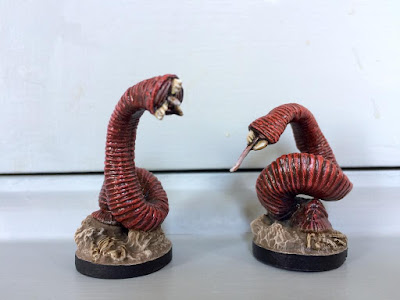 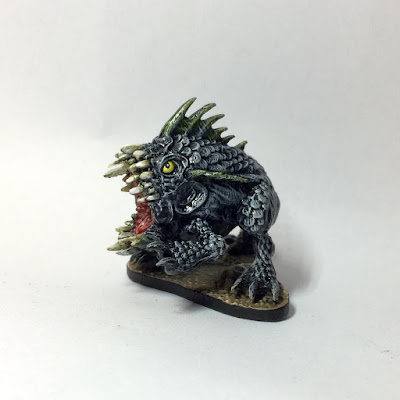 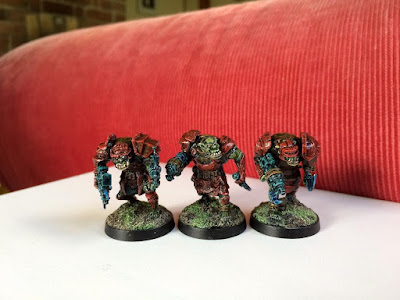 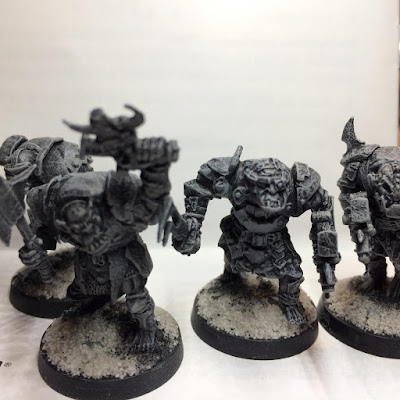 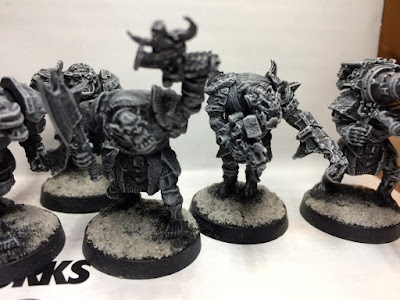 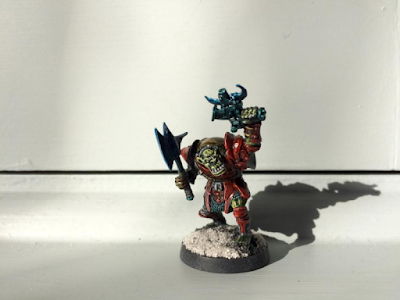 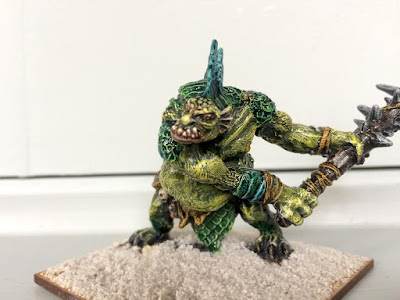