First thoughts on The Dolorous Stroke 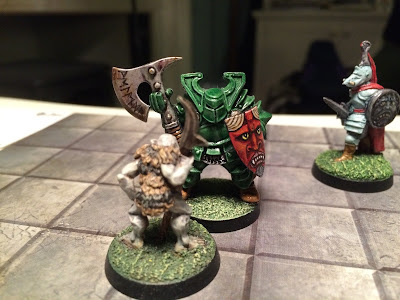 After buying The Dolorous Stroke last night and having a skim through the rules this lunchtime, I was planning a quick playtest tonight, laying out decks of cards while the kids brushed their teeth before a bedtime story. But when they arrived and saw the start of a little battle underway, we decided that Greenwitch would wait until tomorrow. Instead, we played a little three-person skirmish.

All we did was fight, which is not really what these rules are designed for; indeed, there are several interesting pages on designing scenarios and . But it was an enjoyable session all the same.

Why did I buy the rules? Well, the author's blog is great, I'd enjoyed her discussion of the game in embryo and it was partially inspired by the superb Gardens of Hecate miniature blog, which is one of the very best things on the internet. It's also got a great title.

And the PDF cost only around four quid for more than a hundred pages. The rules are nicely laid out and illustrated with tasteful copyright-free black-and-white illustrations (Gustave Doré, Henry Justice Ford and the like). They're well written and edited (I spotted the odd typo, but by the standard of games rules, they're pretty 'clean', which is always welcome).

The game's inspiration is chivalric romance - Le Morte D'Arthur, Orlando Furioso - and fiction inspired by it. There's some boxed text scattered through the rules presenting an alternative chivalric world, but that's not really central to the game. You could use it for pretty much any sort of medieval-fantasy set-up. One minor quibble: the black background for the background text probably isn't the printer-friendliest thing. On the other hand, there's not much of it.

There are magic rules. I haven't yet read through those; I generally leave magic until last - or leave it out all together. And there's a bestiary. This struck me as just about right for the assumed setting, with dragons of various sorts, undead, ghouls, fairies of various sorts and giants. One odd note is the inclusion of huorns in the fairy section - the Tolkien reference is strangely discordant.

Most immediately interesting is the action/combat system. This uses alternative actions, one per character, and combines the use of polyhedral dice with playing cards to track bleeding and wounds.

To test this out, we played a little three-way encounter in some gloomy chamber between two knights from the sample characters (dismounted and re-armed to suit the miniatures we used) and a goblin.

Each character needs a full deck of cards, which gives an idea of how small-scale these encounters are meant to be. With three decks in the house (thanks to a quick Amazon order today), we were just about OK for this. You separate your character's deck into the four suites, with hearts representing blood (effectively hit points) and clubs being drawn for wounds. Each weapon type has a different profile; swords are easier to hit with than axes, but axes have a slightly greater chance of causing a serious wound; spears are easier to wield than either, but less likely to pierce armour and with a lesser chance of a serious wound. And the wound types differ too; a mace can give you head trauma or smashed ribs; a spear can run you through, puncture a lung or pierce your heart. Other wounds cause extra bleeding or limit movement.

Combat's dynamic, with the winner of each exchange forcing the losers back before any damage is worked out. This can force the loser to spend an action to get back into the fray - or allow the winner to withdraw. Fighting is perhaps a bit Warhammerish, in that there's a roll to hit, a roll to wound and then a card draw for damage, but with three miniatures on the table rather than 300 or so, it's much less onerous.

Our little skirmish rolled merrily back and forth across the chamber. In the end, my daughter's axe-wielding green knight triumphed - but with only one card left in his blood bank. She'd played him well by keeping him out of combat for several turns when mangled guts would have cost him blood with each action. That allowed the goblin and the blue knight to slog it out, until the goblin was eventually slain.

So how was it? Here's a brief list of what I liked and I didn't. Note: these are first impressions after skimming the book and playing only a brief fight in a game that's clearly designed for much more.


Dislikes (and perhaps some workarounds?)


Anyway, I'm looking forward to the next game - and to trying out other rules. For our next session, I'll probably have the players cooperating initially in trying to rescue some grail-type thing from a nest of monsters. I'll try out my insta-death and wounds-only workarounds to allow the knights to face a much larger number of foes.

One approving note from the kids: "This game is really gruesome!". 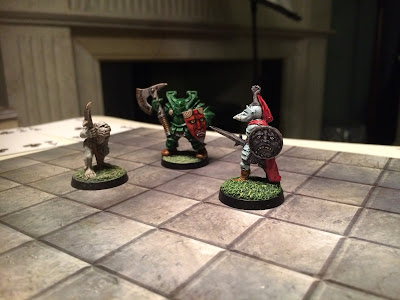 Email ThisBlogThis!Share to TwitterShare to FacebookShare to Pinterest
Labels: The Dolorous Stroke