"But there were some others that were horrible: man-high, but with goblin faces" 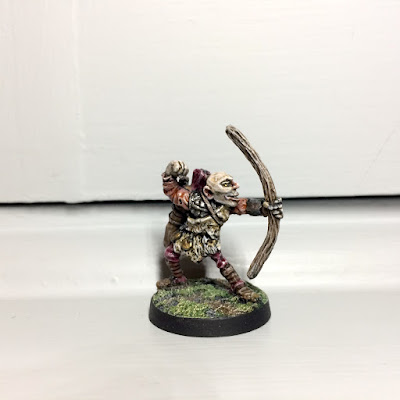 This was a very quickly painted half-orc - two hours from start to finish. I just blocked in base colours, drybrushed with silver-grey, added metals, added washes and then spent a bit more time on the face and hands.

He's one of the later range of Aly Morrison's C10 half-orcs. I prefer the earlier, solid-based ones, as they're nastier-looking. The later, slotta-based ones like this chap are more comic and loutish rather than grim and murderous like their predecessors. Still, the later range are nice, characterful miniatures all the same - perhaps more at home bullying hobbits in the Shire than hewing down Theodred at the Isen (change their livery and give them axes, and the earlier bunch would do that job nicely).

This fellow will probably see service in our D&D games as a brigand, an untrustworthy hired scout or even a PC. 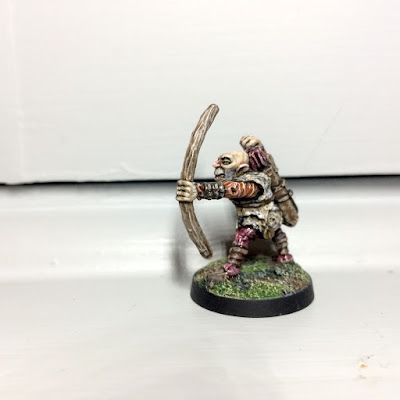 While the Great Wyrm's away - planning a skirmish session (part three)


Following on from parts one and two, this is a bit more thinking out loud about how to set up a multi-player skirmish game for the weekend. In seeking to regain their ancient treasures from the Great Wyrm, the dwarfs of Zarak-Zigil have recruited a motley band of adventurers and some lizardmen of the Long Jaw Tribe, promising them shares in the treasure and - in the latter case - orc-flesh to eat. Here's the lizardman warband:

This warband has no leader - but the low Q (i.e. high quality) and high C are a potent combination, as I know from years of losing skirmishes to my son's lizardmen. The Q3, C4, Amphibious, Tailslap profile is the classic lizardman from the original Song of Blades. The band has only one shooter, but the high C and long bow make him fairly potent.

But what do these lizardmen want that might cause some interesting conflict with the dwarfs and adventurers? They doubtless like shiny things, which could cause conflict with the dwarfs if the reptiles get to the Arkenstone (or whatever I end up calling it) first. So that's one potential clash. Perhaps the Arkenstone is worth three times as many victory points to each warband as any other treasure item.

We can add a grislier area of conflict, though. Perhaps dwarfs are a particular delicacy for the Long Jaws. And perhaps their chief is hoping that the band will bring back some dwarven corpses. Surviving dwarfs wouldn't be happy with that, though. So the best outcome for the lizardmen is if all the dwarfs are killed or routed in the course of a victory. And the next best would be if the surviving lizardmen outnumber the surviving dwarfs. The lizardmen are quite a bit tougher than all but one of the dwarfs, so if there are (say) four surviving lizardmen and three surviving dwarfs, the dwarfs will probably have to abandon their comrades to the Long Jaw chefs.

And what about the adventurers? Well, for these, I've decided to go with an all-personality mix: a powerful fighter, a wizard and two, um, ninjas. These are all pretty powerful individually, but there are only four of them. In Song of Blades, numbers are generally very telling; even the mightiest warrior can be brought down fairly easily when he's surrounded. And if the orc leaders get organised, some concentrated fire could take them down fairly quickly.

As for goals, I think their aim will simply be to amass as much treasure as possible while defeating the orcs. The Arkenstone-equivalent will be an obvious target. But they might also be looking to earn a bounty for lizardmen hides. Then again, the lizardman chief might have a taste for humans as well as dwarfs. I doubt the Raiders would care much what happened to their fallen comrades (they're too ruthless for that), so perhaps the lizardmen just gain a victory point for each slain human. They've got to taste better than orcs ...

Note that for the lizardmen, the orcs have to be defeated for dead dwarfs and humans to count towards victory points. If the orcs hold the field, then the lizardmen gain nothing. That should incentivise the lizards to do the job they've been hired for, even if they're a little unscrupulous about what happens in the heat of the fray.

Next up: 'reserve' warbands (at c. 200 points), wandering monsters, formal victory conditions and the lie of the land.

"You ate my father - prepare to die!" - planning a skirmish session (part two)

So, after yesterday's thoughts, I've got half a skirmish game ready. Magrtrur's orcs are trying to take control of something, and, being orcs, they're going to be at each other's throats.

That gives us common goals for the orcs and individual goals for each of the three orc players. But of course, they won't just be fighting each other.

No, the orcish expansion is going to be opposed by a motley crew of dwarfs, lizardmen (by popular request) and either elves or adventurers. Here's the dwarf warband:

The dwarfs are motivated by vengeance and greed. Vargram, the orcish captain of wolves, ate Karak Proudcrest's father. So, Karak's player gets a sliding scale of rewards for Vargram's death: perhaps 1 point if he's killed (not routed), 2 if he's killed by a dwarf and 3 if he's killed by Karak himself.

This sets up a nice quandary for the dwarf player: he's saddled with Short Move, but wants to kill the fast-moving wolf-rider captain. Some tactical thinking will be required. And he should also get to spout the immortal line "Vargram, captain of wolves! You ate my father - prepare to die!".

So much for vengeance. But what about greed? Well, the obvious answer is to locate an Arkenstone-type object in the underground section of the table. And if we're stealing from The Hobbit, we might as well go the whole hog and say that a dragon has been occupying an ancient dwarven redoubt that contains all manner of treasure. The dragon flew south two nights ago, giving the dwarfs (and the orcs) their opportunity. The dwarfs have hired help, promising a share in the treasure that the dragon has abandoned. But the unscrupulous adventurers and cold-blooded swamp-dwellers that have answered Zarak's call may not recognise the off-limits nature of the "Arkenstone" ...

And as we'll be using wandering monsters in this scenario, we've got the unluckiest roll in the form of the returning dragon. We've also got a name for the scenario: While the Great Wyrm's Away.

Next up: the lizardmen of the Long Jaw tribe.

Planning a skirmish session (part one)

I'm planning a game of Song of Blades and Heroes to entertain the kids and friends this Sunday. I though I'd set down my thoughts to see if it helps to improve their shape.

We'll have six players. Although we've had six-sided games with everyone out for themselves in Mutants and Death Ray Guns, I want to try something more structured this time. So, to keep things simple, I'll create six warbands in two allied sets of three.

The key for this kind of game is to ensure that no one's left out for long. Song of Blades is great for that, because the turns are of unpredictable length. We'll zigzag across the table, so Side A's first player activates, then Side B's first, and so on. Each player will have a natural opponent, but they'll be free to ignore the enemies facing them to help out their allies to left or right.

So, what should the sides be? Well, I have a lot of orcs. I want to use my recently paint Nick Lund orcs, and they break neatly into various divisions - normal orcs (chiefly Grenadier), elites (Chronicle giant black orcs), wolfriders (Chronicle and Grenadier) and some very large ogreish types (Chronicle ogres and very large Grenadier orcs). I also have some smaller and older Chronicle orc, should pint-sized rabble be required.

That gives us three divisions: an orcish chief with giant bodyguards, an infantry division (perhaps with some elites) and a band of wolfriders. Each division needs a leader: the chief, obviously, and the cavalry commander (above), and one other. Initially, I was going to have a shaman as the third leader, but I think he might be needed in the chief's warband, to give that group a little firepower. So the infantry leader could be an ambitious sub-chief - perhaps the chief's son (Bolg to his Azog). And that suggests a patricidal subplot. And perhaps the cavalry commander is loyal, but detests the son. I can sense some individual victory conditions coming on ...

Each warband should be about 400 points. In Song of Blades and Heroes, routs can be sudden and devastating. So, to keep all the players involved, those who are eliminated can play "reinforcements" in the form of 200-point warbands. We'll use the Advanced SoBH rules to maximise variety among the warbands. I'm not sure if we'll use reactions: a great rule, but one that might slow things down with so many players. If we do, it'll be in this format: A1 can only react to B1's failures, and vice versa.

NB: this warband violates the usual 50% limit on personalities. But that's OK.

NB: this warband has too many points in personalities because of the Savage rule. But it's essential for those nasty great Lund wolves (and wasn't a personality trait in the original SoBH)

Collectively, these orc warbands are trying to secure the advantageous territory on the battlefield - probably some areas of ruins with an underground section. They'll all get victory points for each area and treasure item secured by any of their side. But there will also be some individual victory conditions, each known only to the pertinent player:

Vargram may seem to get off lightly in these conditions, but he'll be a target for the opposition (vengeful dwarves, hungry lizardmen and perhaps some elves). More on them tomorrow ...