I bought these Essex lizardmen on a nostalgic whim. They used to be advertised in White Dwarf, along with the entire Essex fantasy range. They're crude but rather charming, I think. And they're certainly lizardmen, which has caused the kids no end of amusement.

Ungirded loins aside, they're clearly based on the Monster Manual illustration, as are Citadel's much smaller Fiend Factory reptile man and some of the big lizardmen that Grenadier made (now in production as Mabuyan lizardmen at Mirliton). Those would fit well with these Essex fellows - and would also explain why the slightly more civilised-looking Mabuyans are bothering with loincloths!

I painted these very simply, using just two shades of green and a wash. I didn't bother with paler underbellies; quite a lot of reptiles seem to be largely the same shade all over, and I wanted these creatures to look simple and bold. 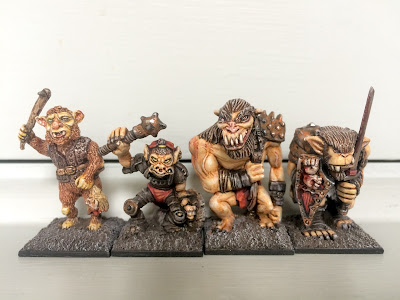 I rebased an Essex bugbear to join the last post's merry crew and added a goblin from the same D&D boardgame. I thought the latter would work well as a female or young bugbear, as it's much too big for a 28mm goblin. 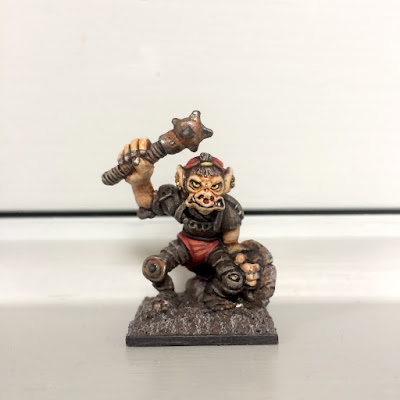 Yesterday, she featured as the bugbear chief's concubine in the caves of chaos. She proved braver than her mate, who fled to the minotaur. But he was hit with a sleep spell an hour or so later, and that was that.

I'm fond of the Essex bugbears; this one was painted a while back and could probably do with some sharpening up.

A batch of bugbears 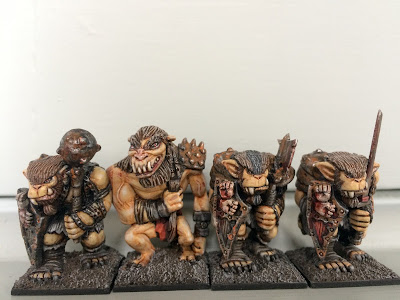 Our lockdown D&D game must now be hovering at over or around 30 session (we've been playing every day). On Friday, the party made their way north from the city of Kalbarad,* where they had been involved in much factional skullduggery, to return to the Keep on the Borderlands, now partially demolished by an ancient giant they unwittingly awakened. 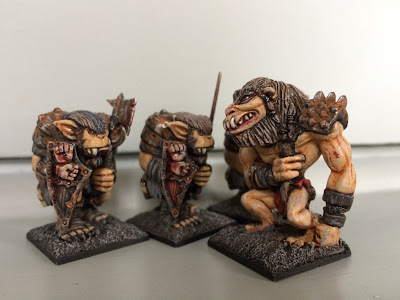 I thought that they might raid the bugbear caves this time around, so got these fellows painted up on Saturday morning. As it happened, they confined themselves to massacring orcs. But the bugbears may well feature today.

These miniatures are vinyl pieces from some D&D boardgame or other. The big one is actually an ogre, but he'll be a bugbear chief or shaman for me. I cut them off their thick integral bases and stuck them to the same square plastic bases as the rest of my dugeon-crawling stuff. I also converted two to carry different weapons, and added a few greenstuffed details here and there; I want each to be distinct for hit-point-tracking purposes. 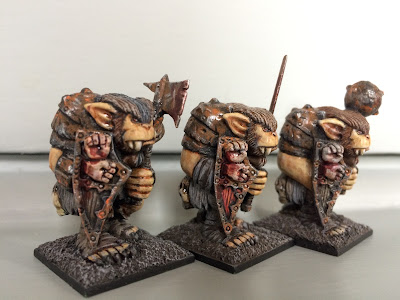 I like these figures for a few reasons. They were very cheap, which always helps, and they're very quick to paint up. And their relative crudeness should help them 'read' well over Zoom (only two of the seven-strong party are in the room with me). Also, the blocky way in which they occupy space means that they look suitably imposing on the table but still fit on a 25mm base (their original bases are about 22mm). So they fit in dungeon corridors, rank up for wargames and work well for the likes of MicroHotT and Book of War.

*A name I invented on the fly before it featured in the game, but which turns out to be a village in India. 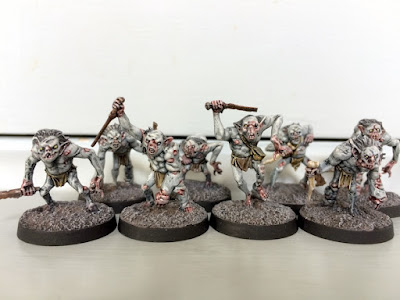 I did these on Saturday night/Sunday morning in time for the early-afternoon start to our D&D session. The party had met a few ghouls in a crypt during Saturday's session, and great fun/fear/loathing ensued. So I decided to add some reinforcements for their next session. I had a sprue of these GW "goblins" to hand, so whizzed through a few late on Saturday night and early Sunday morning. And they were ready to go after lunch.

They're pretty rough, and I will touch up the faces when I get a moment. But they did their primary job: producing squeals when players (both around the table and over Zoom) noticed that they'd appeared in the tunnels behind the PCs ...

As an aside, great as these miniatures are, I can't think of "goblins" that could be any further from those Tolkien describes in The Hobbit. His have clashing armour, well-made weapons and whistles. These ... do not. But for Lovecraft-style ghouls, they're pretty great.
Posted by JC at 08:59 4 comments: 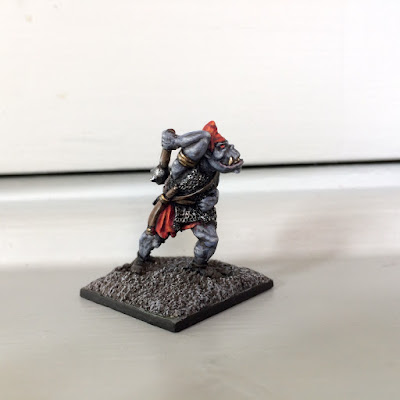 Gamers of a certain vintage will remember the Prince August fantasy moulds. These allowed you to cast your own miniatures in the kitchen (after overcoming considerable parental protest). 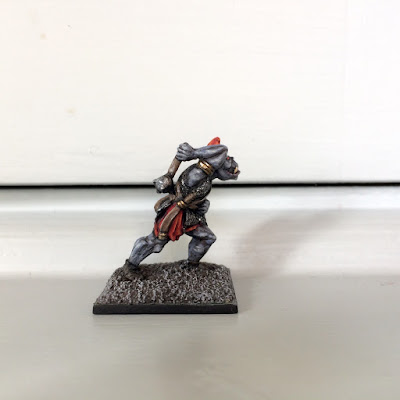 At one point, I think the miniatures were also available direct from the company - and these were always much sharper castings than you could typically produce at home. I'm pretty sure that this fellow is one of those. Alas, while the moulds are still available, the cast range appears not to be. 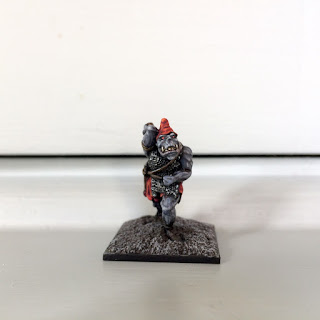 I always liked the style of their orcs, hobgoblins and goblins - the last of these perfect for Alan Garner's svart-alfar. I only ever owned one mould: the orc archer that accompanied this fellow in the full three-figure mould. That allowed me to churn out an army of small orc archers (fielded as goblins in Warhammer). 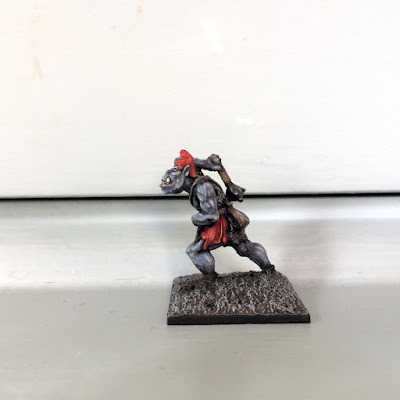 One thing that's nice about them is their size. They're 25mm rather than 28mm, but the orcs were presumably intended to be quite large at that scale, so they work about right as D&D-style one-hit-die foes.

I wanted to experiment with a very fast painting technique here. Drybrushing (the usual refuge of a scoundrel!) isn't much use with these miniatures, as they're fairly smooth. So I painted all the base colours on and then washed everything with Agrax Earthshade. It was then just a case of adding base-colour highlights and a second touch in a lighter colour. The skin and the red clothing got a third highlight too. And that was that.

I have a dozen or so of the same designer's Mithril orcs (Mithril was or is a subsidiary of Prince August) and, perhaps, some of my home-cast archers lurking in the leadpile. I'm going to dust them off and paint them to match this fellow. One can never have enough bands of RPG humanoids - and I have a female or two and some infants to go with this lot. 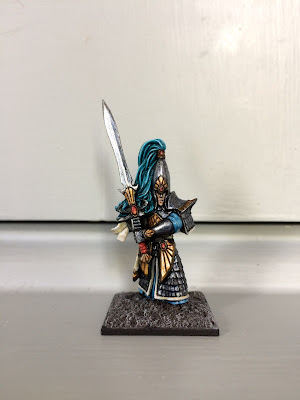 Our lockdown D&D campaign - which by now must be about 25 sessions in - required a new PC miniature after another player joined on Friday. Luckily, I had an elf with a two-handed sword on hand and an hour or two to spare this morning after a spot of cycling.

No masterpiece, but he looked quite distinctive on the table - which matters more than usual when two thirds of the party are playing remotely.