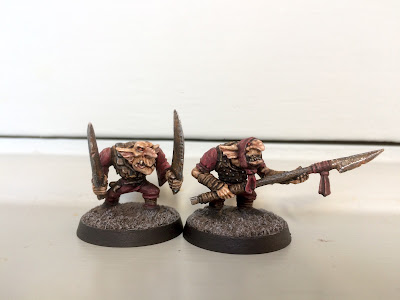 The GW "goblin regiment" kit isn't a triumph of the miniature-maker's art. The figures are oddly proportioned (even for goblins) and look awkward (even in the official website photos). But as I'd picked up bits and pieces of the set second hand, I thought I'd kitbash a few goblins to make a small warband. 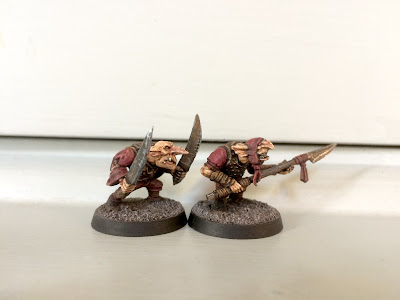 These fellows have arms from Skaven and gnolls and gretchin and gnoblar heads. Oddly enough, I was inspired to make them by the prospect of playing some swashbuckling skirmish rules - All for One (Eureka) or Flashing Steel (Ganesha Games). Goblins might seem an odd choice for that, but I thought fairytale goblins might work quite well as adversaries for seventeenth-century musketeers or the like.
I can see these little fiends as being responsible for all sorts of villainy of the kind that takes swashbucklers to sort out. 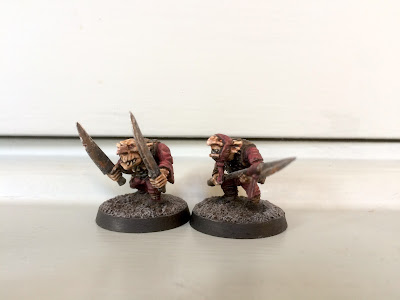 I'm also thinking of using them for those skirmish games that have (or can have) highly differentiated individual roles: Havoc, Advanced Song of Blades and Heroes, Battlesworn, Frostgrave and the like. So the chap with the two swords could be a duellist in Havoc, a treasure hunter in Frostgrave and a combat master in ASoBH. Similarly, the fellow with the polearm would be a spearman in Havoc, an infantryman in Frostgrave and a long-reach fighter in ASoBH.
They need strength in numbers, of course, so I'm putting together a few more - some kitbashed like these and others just built as they come. I'm aiming for arquebusiers, archers, crossbowmen, some heavily armoured fighters, at least one wizard and some boar-mounted cavalry.