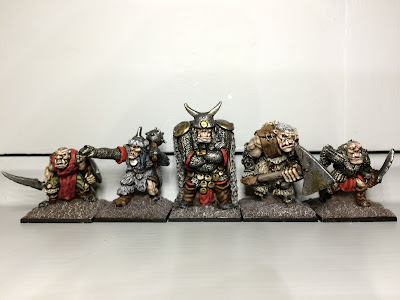 A while back, I put together some orc units for Saga using square bases - something I'd largely avoided since getting back into gaming. I soon found that these figures - on their dark, low, neutral bases, fitted in rather well in RPGs. In our long-running lockdown D&D campaign,  square-based miniatures have become the norm.  They fit unobtrusively onto dungeon floor plans, and they allow figures to be overlapped more readily than GW-style slottabases. And I like the way that impromptu units form up in the dungeon, making it clear who's where in the marching order or melee.

So, as a result of the long and ongoing D&D campaign, I've ended up with large numbers of miniatures based in this way. That got me thinking about rank-and-flank wargames using individually based figures, and we've started to play through some (as documented in my last post). The next one on our list was Ral Partha's Chaos Wars, which looks nicely streamlined. But it requires 12-strong infantry units, so I need to get a few more miniatures painted up first.

That pushed a newer game to the front of the queue: Oathmark. It's published by Osprey and written by Joseph McCullough, the author of Frostgrave. We've played Frostgrave once or twice and quite enjoyed it, though spell-heavy games aren't really my thing. Oathmark, however, looks like it might be.

The game comes as a very nice hardback book with illustrations aplenty. The rules are clear, well written and admirably laid out. This really helps: I feel I've picked up the gist of how to play far more quickly than with most games of this sort.

We haven't yet played a game; that will come at the weekend. But here's my take on the rules so far.

Oathmark uses a d10-based system. Common checks are done on 2d10 against a stat (taking the best roll); in combat, a d1o is rolled for every fighter in the front rank, capped at five. No buckets of dice, then.

The game seems to strike a nice balance between the overlong statline of classic Warhammer and the minimalist approach of many mass-battle games, in which a troop type defines everything. Oathmark has a number of set troop types, including 'soldier' (hand weapon, light armour and shield), 'spearman', 'warrior' (a more heavily armoured version of 'soldier'), 'archer' and 'linebreaker' (heavily armoured troops with two-handed weapons), but these are varied by species. As an example, dwarf linebreakers are tougher and better disciplined than their human equivalents, but move more slowly.

The test of the statline will come in play; I'll be interested to see how much the small differences between troop types and species actually matter.

Alongside the statline are special rules. Wild Charge makes troops more likely to both cause and take damage, for example, while Shielding does the opposite. I haven't pored through these rules in detail, but they look to be clear and memorable - important if one is to avoid constant reference to the rulebook in play.

What about unit sizers? Infantry units consist of 1 to 20 miniatures, with a range of 1 to 10 for cavalry. Frontage is always 5, when numbers allow, and a 10-sided die is rolled in shooting and melee for each figure in the front rank. I like this: it allows larger numbers to count through additional ranks, but it keeps things neat.

For the same reason, I applaud the use of 25mm frontages for all normal infantry and cavalry. Warhammer's skipping between 20 and 25 for human-sized figures was irritating and untidy; the 20s probably should have been abandoned as were the 15mm frontages (present for heavy infantry in the first edition of Warhammer). That avoids oddities like identically sized and similarly equipped half-orcs and hobgoblins being on differently sized bases. Most monsters are on 50mm squares, which again keeps things tidy. And the uniform infantry and cavalry frontages mean that the odd monster based differently for another game will be easier to accommodate.

Combat is kept tidy too, in a similar way to Dragon Rampant and its ilk. Units fight in distinct clashes that are always one on one, and these result in the separation of the units in various ways at the end of the round. A nice innovation is allowing the victor to choose the outcome of a fight, so that the winners can retire in good order or drive off the losers instead. Every round of combat that causes casualties leads to a morale test; failed morale checks don't cause a rout, but they do make units extremely vulnerable to routing if they're attacked while in a disordered state. All of this looks very promising.

Morale checks use the Activation stat, which is also used to determine the actions a unit can take. Unlike Dragon Rampant, there's no prospect of forfeiting your turn, but a failure to activate limits the options available to that unit. So more erratic troops - e.g. goblins - will be harder to command, but not cripplingly so.

I'll wait until we have a game or two under our belts before tackling the magic section.

This is something that has no effect on the quality of the game one way or another. But I find it interesting nonetheless. The Oathmark rulebook explicitly states that one model equals one man. That's not how the game seems to be designed, though. The  very fact that it's "rank and flank" betrays this: surely the largest permitted unit size of 20 men must really be 200 or 400 men or something similar. After all, it's hard to imagine a 5x2 formation of 10 men having to bother with wheeling and other manoeuvres - or maintaining formation when charged in the flank!

So what seems to be at work here is the same sort of tacit figure scale that Rick Priestley described Warhammer as having: an implicit 1:20 ratio like the historical wargames of that time (WRG, etc.) but one that was never stated outright and which was disregarded for purposes of including standard-bearers, character models and the like.

In Oathmark, a king is always better fighter than a prince of the same species. That, surely, points to the difference being made by the quality of the bodyguard - all being equal, you'd otherwise expect a prince in his prime to be physically superior to a king! But equally, you'd expect a king's bodyguard to be the best in the realm. So if the 'king' model actually reflects the ruler and his elite household warriors, it all makes sense.

Again, this has no impact on how the game actually plays, but the ostensible 1:1 ratio is an interesting design decision. I wonder if it's simply because younger players tend to dislike the abstraction of figure scales; I remember finding the idea vaguely irksome when I was a kid, though I'm not quite sure why! It doesn't bother me now, so in our games, we'll be assuming that a unit of 20 goblins is actually around 400 mewling little monsters.

With any fantasy wargame, I'm always keen to see how the various fantastical races are portrayed. Oathmark offers a fairly Tolkienish assumed setting with a strong Dark Ages flavour. The clashes portrayed in the game are assumed to be taking place in "the Marches", about which very little is said. That's just as it should be: unless you're going to write a Glorantha or a Tekumel, you're better leaving room for the players to create the details of the setting. Another laudable design decision, then.

So Oathmark has dwarves, elves, men and - in a departure from Tolkien - both goblins and orcs. The latter seem to be a subset of the former, though, so it's really just big orcs and small orcs (or big goblins and small goblins). That gives five generic troop types, each of which has profiles for different troop types. There's some variation here: goblins don't get the heavily armoured 'warriors' and 'linebreakers', for example, although orcs do; dwarves lack cavalry; orcs have wolf-riding personalities but no cavalry units.

All in all, there are almost 40 basic cavalry and infantry profiles, aside from characters (champions, leaders and spellcasters), artillery and monsters of various sorts. That abundance of profiles means that it should be fairly easy to find appropriate profiles for most humanoid fantasy models. Beastmen and gnolls, for example, should work fine with the orc profiles, and centaurs should work in one cavalry role or another. Hobgoblins of the disciplined D&D sort could use the orcish or human profiles - or both according to battlefield role, perhaps.

There's room for more subtle substitutions too. I was looking at possibilities for a human army and realised that I had several potential classes of 'linebreaker': Vikings with Dane axes; somewhat anachronistic Fireforge knights in mail and surcoats with two-handed swords; Perry Hundred Years War knights with poleaxes; and Perry Wars of the Roses knights with poleaxes and longswords. The last two of these are much more heavily armoured, of course, but it struck me that with full plate, they might fill the tougher, slower dwarf-linebreaker profile nicely, allowing the earlier-period knights and huscarls to act as the 'human' equivalent.

There's a good variety of monsters too, with several associated with each of the main races. Giants, ogres and trolls are to be found here, along with some slightly less familiar names plucked from the folklore of the British Isles: the buggane, eachy, knucker and barghest. That's a nice touch: it makes the game a little more evocative even as the setting remains lightly sketched. Again, a commendable decision. There are dragons too, of course, and the basilisk-ish surma makes a guest appearance from Finnish folklore.

If I have a criticism here, it's that there's no instruction on how to create your own profiles and point costs. I can see, for instance, what the profile for an orc wolfrider should be, but it's not quite clear whether the cost should be just twice that of an orcish soldier. A goblin wolfrider is twice the cost of a goblin soldier, but a bow-armed wolfrider scout is more expensive than two goblin archers. Still, ballpark figures can be worked out easily enough - and, really, who cares whether a fight is fair so long as it's fun?

This may be the jewel in Oathmark's crown - a simple 'kingdom' system that allows players to establish realms and then fight out campaigns with various set actions - deep raids, border skirmishes and the like. Hordes of the Things has a similar schematic campaign system, but Oathmark adds the distinction of having territories required for the fielding of certain troop types. Enemy invasion of one of your territories has an effect on the troops raised from that area.

One other thing that's refreshing about Oathmark is that kingdom set-up is designed to create diverse forces: a goblin king might command some dwarven, elvish or human subjects from his outlying territories, and an elf-queen might have orcs or ogres among her forces.

This is great. Tolkien mentions "wicked dwarves" who sometimes made alliances with goblins. But Oathmark's implied setting reminds me of Poul Anderson's The Broken Sword, published in the same year as The Lord of the Rings. Anderson's troll and elf armies are diverse affairs in which the respective kings command allies, vassals and slaves of other supernatural kindreds. And there's nothing so trite as good and evil: elves and trolls alike are as self-interested as men.

Oathmark points to something like the world of The Broken Sword: in which rain-lashed crags could be the ramparts of an elf-fortress; and travellers might glimpse the corpses of eldritch beings on some forgotten field. I can't wait to give it a go.