We mend the machines of the earth: kobolds and Goblin Market 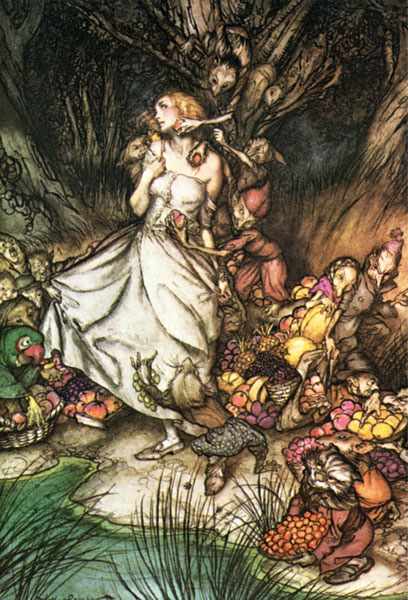 I've always had mixed feelings about D&D kobolds. I like them fine in Chaimail and OD&D, where they're just lesser goblins (whatever goblins are in those games). But the scaly-dog version seemed oddly specific to me, and the lizard version even worse.

I'm still not keen on the diminutive lizardmen. I do like the idea that an infestation of dragon-like creatures suggests a draconic presence or stirring nearby. Surely, though, a more draconic name is warranted for such things: dragonlings, dragon-efts or even dragonewts.

But I'm warming to the dog-men. In part, it's because I've got a reasonable number of kobold miniatures, most of which have never been used. And in part, it's because there's no reason why a goblin (which is what a kobold literally is) shouldn't be a scaly little dog-man.

After all, until George MacDonald created his race of goblins (which Tolkien adopted almost wholesale for his orcs), the goblins of folkore and literature didn't have any specific characteristics at all, except possibly smallish stature and a certain grotesqueness.

Curious Laura chose to linger
Wondering at each merchant man.
One had a cat’s face,
One whisk’d a tail,
One tramp’d at a rat’s pace,
One crawl’d like a snail,
One like a wombat prowl’d obtuse and furry,
One like a ratel tumbled hurry skurry.

The whisk-tail’d merchant bade her taste
In tones as smooth as honey,
The cat-faced purr’d,
The rat-faced spoke a word
Of welcome, and the snail-paced even was heard;
One parrot-voiced and jolly
Cried “Pretty Goblin” still for “Pretty Polly;”—
One whistled like a bird.

The goblin-men of Rosetti's poem are, as far as we can tell, little animal people. That's certainly how they've been depicted by illustrators, from Dante Gabriel Rosetti (Christina's brother, below) to Arthur Rackham (above). And audiences were clearly happy to accept them as such. 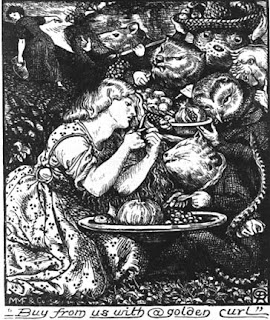 So, there's nothing inauthentic about a goblin (or the synonymous kobold) being a little animal-man. It's certainly a more authentic look than being bright green. And the D&D kobold's fetching horns remind us that goblins can also be little devils.


Wayne at the marvellous Semper Initiativus Unum blog has posted lots of interesting thoughts about the role kobolds can play in a dungeon. I plan to steal most of those for the megadungeon I'm devising at the moment.

In a campaign I ran last year, kobolds - in this case, pallid, stunted, glowing-eyed little men - turned up now and then to warn players of dangers ahead and fill in holes left by purple worms. They spoke only broken Common, though, so the PCs weren't originally sure whether they were being helped or threatened.

In the next one, I plan on having kobolds whose catchphrase will be "We mend the machines of the earth". I see them as being principally like those goblins in Labyrinth that seem to be doing behind-the-scenes stuff: re-aligning corridors, resetting traps and molesting (large, orange) wandering monsters. And, with Goblin Market in mind, I'll have no problem with these kobolds being the old-school D&D sort - muzzles, tails, horns and all.
Posted by JC at 07:24

Email ThisBlogThis!Share to TwitterShare to FacebookShare to Pinterest
Labels: kobolds