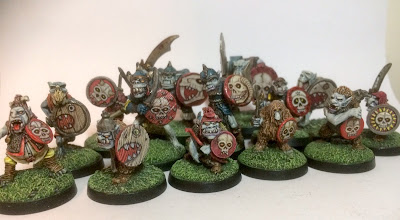 This post follows on from this one, in which I loosely marshalled some thoughts on tweaks to the d20 combat system (using Whitehack).

My proposal for shield was this: a character equipped with a shield can attempt to block an attack with an opposed d20 roll. If the character with the shield rolls higher than the attacker but equal or lower to his own attack value (AV), then the attack is blocked. Draws are resolved in favour of the attacker; critical attacks allow the attacker to choose whether to do a normal critical or break the defender's shield.

Of course, shields come in various sizes. Bucklers have considerable advantages, because they're so small. You could take one down the pub (in the 21st century or in a pseudo-medieval fantasy world) without causing alarm. And you could certainly climb and crawl with one. So, let's give bucklers a -2 AV penalty when parrying. That makes them pretty handy for an unarmoured or highly skilled fighter, and well worth having. The shield of a kobold or small goblin could be used as a buckler by a human-sized PC, but would work as a full-sized shield for its original owner (who has less body mass to cover with it).

Conventional round or "heater" shields use unmodified AV. But these will impose penalties on difficult climbs or similar manoeuvres (typically -1).

Large shields - like a Norman kite or a Roman scutum - give a +1 AV bonus when used to block. But these are even more cumbersome (-2 for most manoeuvres requiring agility, and more at the GM's discretion). And they may have to be discarded in certain circumstances (narrow tunnels, for example).

Huge shields - pavises, perhaps, or tower shields, or the shields of ogres - give a +2 AV bonus but rule out climbing or jumping across chasms.
Posted by JC at 04:31