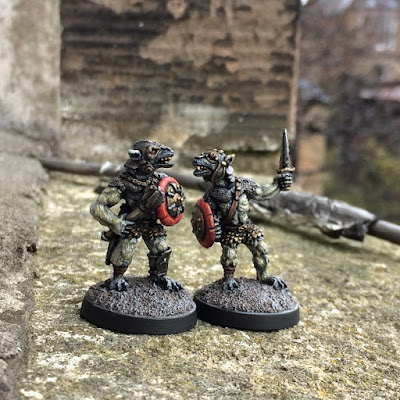 In my last post on gnolls, I was preparing to ditch them from my imminent campaign in favour of hyena-like ghouls. All well and good - but then I chanced upon some of the old Citadel AD&D gnolls in the leadpile. These aren't ghoul-like at all - they're big and burly rather than lithe and loathsome. 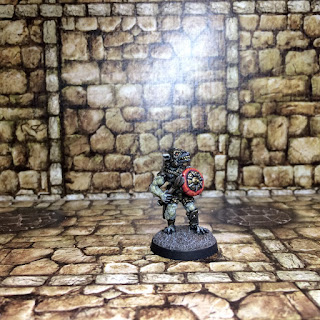 They also have plantigrade legs, like humans. The Frostgrave gnolls are digitigrade, so the two lots don't mix. Then I found some Alternative Armies "dogmen" that I had bought ages ago precisely because they fitted in well with the Citadel gnolls. And then, I got these old Grenadier gnolls very cheaply on eBay. They're not an exact fit with the Citadel and AA ones, but they'll mix in well enough. They're the first finished. 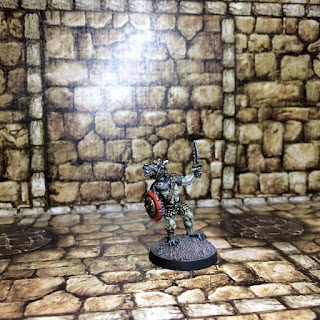 I've always found Grenadier Miniature a bit tricky to paint. They're nicely modelled, but they tend to have very shallow detail - and lots of it - without the exaggerations that make Citadel stuff sympathetic to paint. That defeats my usual stratagem of drybrushing. So for this pair, I just went for speed and "impressionistic" highlights on the fur (greenish-grey, as per the Monster Manual). 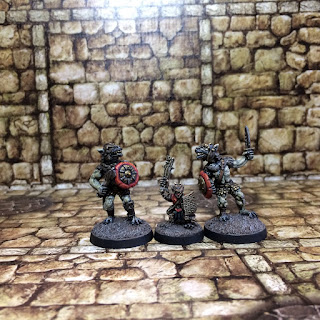