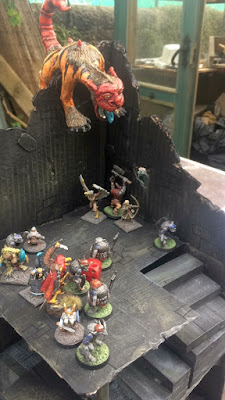 I'm increasingly fond of scratch-building big monsters for RPG encounters. This fellow - Gurakeel, Lord of Manticores and deposed king of the Seventh Hell (since you ask) - took a couple of hours to build from tinfoil, Fimo and greenstuff and maybe another couple of hours to paint. 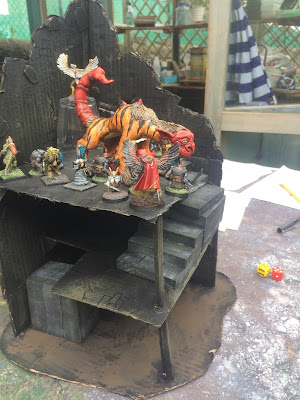 He was the result of a Friday-night decision after that evening's online session ended with an unknown monster crawling up the side of the ruin in which the party were sheltering. Some post-dinner fiddling with tin foil and Fimo produced the base. After baking him, I added some green stuff to the face and then finished off the feet and fur in the morning. Once he was dry, a suitably swift paintjob finished him off.

My son obliged by constructing the ruins in the morning, so we had a suitable stage for an epic slice of action. 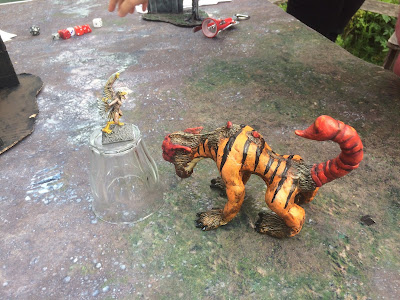 The great thing about scratch-built and - frankly - rushed monsters like this is that there's no need to take much time with the painting. Base colours, a wash, some impressionistic highlights, stripes with a Posca pen and then a tiny bit of care with the eyes, and he was done. And he produced the requisite gasps on his debut - more than I'd have got by taking hours and hours over an expensive miniature.