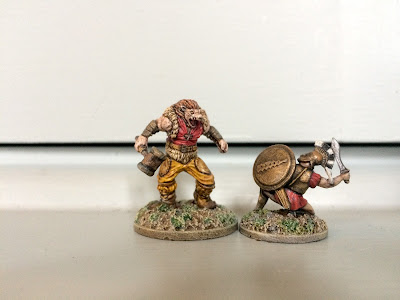 In an earlier post, I rambled on about the advantages of 1/72 miniatures in RPGs: in summary, huge numbers of different historical types, consistency of scale between ranges and the 'anonymity' provided by the less detailed and less exaggerated style of modelling.

Thanks to Caesar and Dark Alliance, a reasonable number of fantasy humans and humanoids are now available in the scale: goblins, elves, dwarfs, orcs, trolls, fire demons, lizardmen, ratmen, Amazons, Cimmerians and undead.

But there's a sizeable gap in these ranges: giants. Large humanoid monsters - ogres, regular trolls (the Dark Alliance ones are enormous), giants, ifrits, jinn, minotaurs and so on - are missing.

The obvious thing to do is to plug this gap with 28mm miniatures. But not all of those 'read' well with 1/72 figures. The Wizkids D&D range (Nolzur's Marvellous Miniatures) do, though.

These miniatures are realistically proportioned. Perversely, that makes them look a little odd next to 28mm figures in 'heroic scale', where hands and faces are enlarged like those of a haptic homunculus. It also makes them quite bland next to most other fantasy 28s. But for those reasons, they look just right with 1/72. They're bigger, but they're stylistically similar in a way that Games Workshop (for example) aren't.

The Wizkids miniatures also have the stubborn mouldlines that some 1/72 figures have. Again, that makes them less suitable for 28mm scale, as they look a bit rougher and readier than hard-plastic or metal figures that can be cleaned up properly. But that roughness is much less of a visual handicap at the smaller scale (visual expectations already being dampened).

The D&D line comes mainly in pairs. It's best when they're of different creatures, as with the wereboar and werebear above and below, or the yuan-ti malisons (a snake-bodied man and a snake-headed man). But there's nothing wrong with a pair of ogres (i.e. Whizkid orcs) or twin giants (the Cursed One, whoever he is). 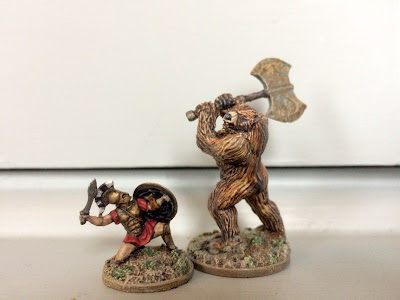 I've scanned through the Wizkids range, and there seems to be at least a dozen packs that would provide good 1/72 monsters. They're available in my local branch of Blackwells, which makes them cheaper than most 28mm miniatures too.