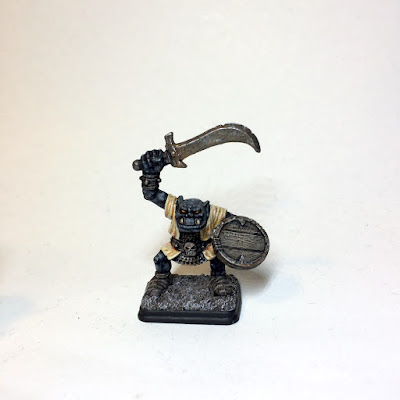 This is roughly how I'd have painted this orc when I was a kid. Then, my impression from Tolkien (and from dodgy 'secondary' sources like the Tolkien Bestiary and the Bakshi film) was that orcs had black skin. In fact, only one small one is explicitly "black-skinned" in LotR, which implies that most are not - although they are described in several places as "black" and "swart". 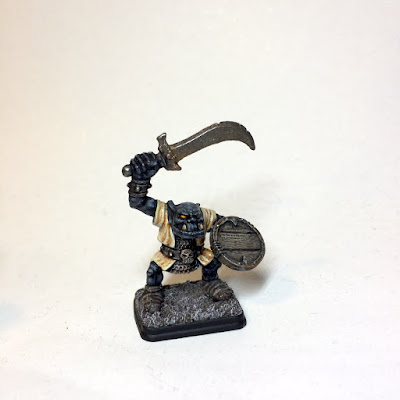 A closer reading of LotR (noting the references to the half-orcs in Bree, Isengard and the Shire) indicates that most orcs are "sallow" - and Tolkien confirms this in a letter. That suggests that the "black" in "black Uruks of Mordor" probably refers to livery (predominantly black for Mordor, Isengard and the North), to armour (as in "clad from head to foot in black mail" like the big chieftain in Moria) or to a generally dark countenance (as in "Black Irish"). 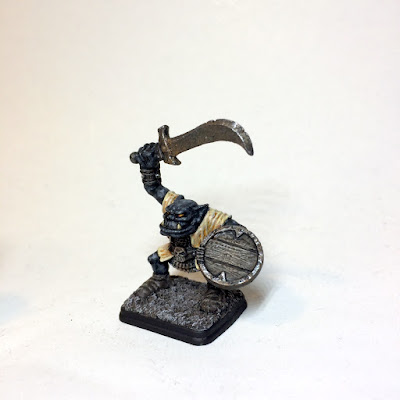 So, with his sallow jerkin and sable skin, this fellow's a sort of negative of a Middle Earth uruk. Incidentally, there's nothing in Tolkien to suggest that orcs had the glowing red eyes that are so often associated with them except the description of the Moria orc-chieftain's eyes that "burned like coals". That could suggest glowing eyes, but it could equally just mean that the eyes looked fierce. But hey-ho - this fellow's got the Bakshi glow.
Posted by JC at 15:26