Neutral ground: the dungeon pub, Mos Eisley and Down in the Dungeon 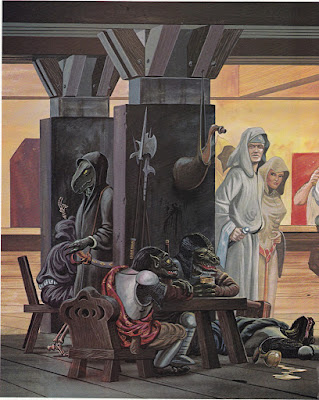 Down in the Dungeon (from Monster Brains)

I'm currently constructing a Tunnels and Trolls dungeon. One thing is certain: it will contain a tavern. I've loved the idea ever since I chanced upon a copy of that 80s curiosity Down in the Dungeon. That book, by Rob Stern and Don Greer, is a sort of D&D cash-in that I once perused in print long, long ago. A primary-school friend's older brother's friend owned it, or something like that (as seems to be the way).

The tavern is a hackneyed staple of traditional RPGs, of course. Superior examples of the trope are Gimpy's Tavern in Pavis and Apple Lane's Tin Inn. But rather than a starting point or brawling ground, a dungeon pub could be something much more interesting.

The first of the boozer illustrations in Down in the Dungeon is entitled Neutral Ground (see above). There's your starting point. This is a place where the normal rules don't apply.

The idea of members of various dungeon factions and adventurers sharing a drink is just irresistible. Those orcs you fought at the Skull Gate? You might meet some of them in here. But they'll be off duty! They might just be prepared to let bygones be bygones. Or they might have a bone or two to pick.

There are probably bouncers to keep the peace. Ogres, perhaps. Or automata of some kind. In any case, it's doubtless a fragile peace. But still, you might get a chance here to buy that scarred orc veteran a couple of pints and maybe loosen his tongue. You might even find out that the Skull Gate is unguarded on certain occasions.

The obvious template (and as the Grognardia blog suggests, probably the inspiration for Neutral Ground) is the Mos Eisley Cantina in Star Wars. For what is a dungeon but a hive of scum and villainy? And what do scum and villains like to do? Why, drink, of course.

So what can we take from Mos Eisley and apply in our underground tavern?

1. All sorts of things
This is neutral ground. Dwarves drink beside orcs. Or perhaps with them. Lizardmen hang out with trolls. Skeletons make a mess on the floor as their wine splashes through them. No one so much as blinks. You might even spot a gelatinous cube in the corner, patiently absorbing spilled liquor from the floor. And of course there are also sorts of potent brews on offer. There may even be all sorts of potent broos ...

2. We don't serve their kind in here.
This isn't a nice place. Some beings just aren't welcome. Elves might be an obvious example. But it might be more amusing if (say) dwarven PCs are denied entrance even though there are lots of other dwarves quaffing away inside. Or half-orcs being barred despite both orcs and humans being served. What we want here is something arbitrary and irrational that leads to improvisation by the players (one dwarf on another's shoulders under a long cloak; a half-orc trying to pass as a whole one; an elf improvising some sort of disgusting disguise). The particular strand of barroom bigotry needn't be explained, though it could be. And the prejudice might shift from one visit to the next - to test the players' creativity or simply to torment them.

3. Most of the best freighter pilots can be found here.
That famous smuggler you need? You'll find him at the Underworld Inn when he's in town. This is the place to meet NPCs who need to lie low.

5. This place can get a little rough.
... and so should NPCs. The PCs might have the opportunity to help out an NPC, thus earning trust or gratitude.

6. Sorry about the mess.
Whatever happens, the patrons and management have seen it all before. Throw a few coins down on the bar, and no one will say anything.

Now, while the dungeon pub is certainly gonzo, it needn't be goofy. The obvious parallel is with a fairy or goblin market (see Christina Rossetti, Jack Vance's Lyonesse and Hellboy 2). The irrationality of the prejudices in 2. above could be played up nicely as a sort of fairy whimsy.

But what else could we add? Well, if we take the fairy aspect (through a Vance or Susannah Clarke filter, perhaps), we could have a lot of fun with the drinks. So what's on tap?

1. Session ale.
This is terribly, terribly moreish. After one pint, you'll want another - unless you can make a Luck save (T&T) or a Wisdom save (D&Dish systems). If you fail that, you'll have a penalty on the next save (a higher-level save in T&T), and so on. It costs you money (price to be determined by GM). And when you run out of money, you'll want to trade gear, weapons and armour. It also it temporarily reduces your CON by a point for each pint drunk. When that reaches 0, you pass out for d8 hours. If you make your save, you succumb to a fit of violent retching. The CON points return at a rate of two an hour thereafter as you sober up.

2. Veritas vino
This is delicious. The trouble is, it relaxes you with its rosy glow. You feel so good that you just have to tell anyone you meet what you're doing and why. "We're planning to come back on Seventh Night to go through the Skull Gate - because it isn't guarded then!". Drinkers of this wine tend to attract an audience.

3. Murder mead
It's very tasty, but it makes you violent. Very violent. It achieves this through a weird inversion of reality. If a  drinker fails a CON save (-1 for each pint), he or she will perceive a random stranger in the bar coming up to them and issuing a challenge ("I don't like you", etc.). In fact, though, the drinker will have done precisely that to the stranger. Mayhem often ensues.

4.  Braggart juice
This makes the drinker very convivial but also inclined to boast. I'd leave this one to the player's ingenuity - with XP or cool points for truly epic bragging.

5. Slumber wine
Think Bombur in Mirkwood. Slumber wine is a powerful restorative (recover 1 HP or CON point, depending on system, per goblet), but it isn't meant for mortals. Make successively more challenging saves with each glass or fall into a deep, deep sleep for 6 + d6 hours. While asleep, the  character will occasionally chuckle or smile contentedly.

6. Orc-draught
This is also a restoring drink, but it tastes awful: fiery, astringently herbal and cough-inducing. A CON check is needed to keep it down, but it restores 1 HP/CON point per flagon. Failure to "take your medicine" will attract raucous mirth from nearby orcs. Half-orcs may benefit from the drink without requiring the check.

7. Legstealer
This is a pleasant-tasting ale. It appears light, and it's cheap. Each pint reduces the drinker's DEX by one point - but it only takes effect when they rise from the table. They will then be hit by the full penalty immediately. Points are recovered at the rate of one an hour thereafter.

8. Sealbreaker
This is refreshing. But make a CON test (with successive penalties) for each pint or feel an urgent need to urinate. Once this starts, it will recur every few minutes - and in all stressful situations - for D4+1 hours.

9. Ruby ale
This is a wholesome drink (recover D4 hit/CON points per session, regardless of how much is drunk), but it reddens the skin remarkably. The effect is cumulative; one flagon makes you look a bit flushed. By the time you've had six, you'll have gone full Hellboy. The effects are (d6): 1-2 measured in hours per pint; 3-4: days per pint; 5: weeks per pint; 6: permanent.

10. Elf-draught
This is erudition in a glass - at the expense of your physique. Each serving takes a point from your ST(R) and adds it to your INT. It's a truly delightful drink, though - you'll need to make an INT save to stop. This gets easier, though, the more you drink. It has no effect on those with elfin blood.

The names of these beverages change with baffling frequency, of course. And there are doubtless many more ... 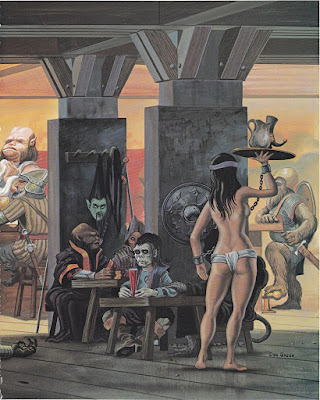 Email ThisBlogThis!Share to TwitterShare to FacebookShare to Pinterest
Labels: Down in the Dungeon, dungeon-crawling, RPGs