Megadungeon mechanics part five: the joys of one hit die and the implications of what has gone before 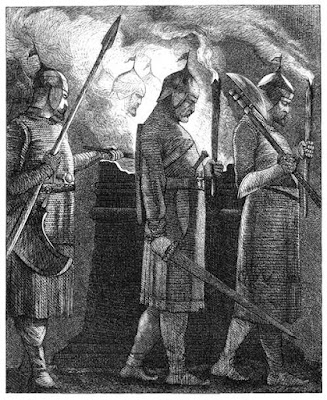 I mentioned in the previous post in this series that my forthcoming megadungeon campaign will be more like a wargame than our main D&D campaign. That could be  misleading, though, as I mean it in only one very specific sense: that combats will mostly be of the one-hit variety. This is going to be - for most players - a low-level campaign. A character that gets to level two will be cherished. And one that gets to level three will be prized.

In part, this limited advancement will come down to player decisions. As I've noted before, I'm using gold for XP - but only if that gold is spent on unspecified advancement-related stuff: training, study, sacrifices, etc. I'm also going to make equipment - notably armour - much more expensive than it is in the common iterations of D&D. I want a mail hauberk to be a significant treasure item in its own right. Full plate harness might cost as much as levelling up. And then there's the process of hiring mercenaries that I've set out: the common way to do this is to have them fight for an equal (or double or triple) share of the expedition's loot, which will cut down the amount of gold available to PC. When they can be hired for a day-rate, that day-rate will be high. All of this means that the players will be constantly choosing between advancement, equipment and assistance.

It also means that most PCs will be on a solitary hit die for much of the time. I'm toying with the idea of having PCs roll their hit dice for each expedition, although that might prompt a mutiny. But as monsters will be doing fighter weapon damage (d8/d10) for the most part, even second-level fighters will be vulnerable to a lucky stroke from a hobgoblin poleaxe (d10).

So characters will be more like Balin (taken out by one orc-arrow) than Boromir (pin-cushioned by countless arrows and still fighting to the last). This has three main implications.

1. Big battles can be handled easily. If the players hire 20 mercenaries to raid a goblin lair, we might conceivably have 50 or more miniatures on the table. But if we know that most of the goblins will be killed in a single attack and that many of the mercenaries (and PCs) will be too, we can look forward to an initial frenzy of d20 rolls and then a rapid clearing of the battlefield. Mass combat won't involve much more book-keeping than a typical skirmish wargame, and the deadliness should keep it exciting. I expect a lot of traditional PC activity (sneaking, stealing, trickery) to take place during large-scale combats as well as as an alternative to them.

2. Shields shan't be splintered. Because I want highly dangerous encounters, I won't be using Trollsmyth's excellent "shields shall be splintered" rule. We use that in our regular D&D campaign, and it's great. But in the megadungeon game of fully equipped expeditions, it will just lead to mules being burdened with umpteen spare shields. What I'll probably do to compensate is have larger shields modify AC by 2 or 3 rather than 1, which will be reserved for bucklers. So a tower/kite/buckler hierarchy of 3/2/1 modifiers is probably the way to go - although I'll be thinking about this a bit more.

3. Tactical retreats will be common. When running our main D&D group through the Caves of Chaos last year, I though that one of the most satisfying sessions was when a raid on the hobgoblin caves utterly failed. It ended with some PCs badly wounded and the hobgoblins hunting for them with hounds in the forest. And of course, the PCs swore revenge - which was all the more satisfying when it was eventually achieved. If your characters have only one hit die apiece, you're going to be very sensitive to the turning of the battle's tide. And that leads on to the next point.

4. Game sessions may involve multiple expeditions. I really like this concept: that three or four hours of play might not be confined to a single raid, but could feature two or three. In running our 250+-session lockdown campaign, I've observed that the joy of the game comes as much from the story that emerges between the sessions as from the sessions themselves. I want to reproduce that even in an episodic and occasional campaign, so that grudges can form, vengeance can be taken and best-laid plans can gang aft aglae. And the best way of doing that is to have more story in a single session. For that reason, downtime will be almost instant. Once the PCs are out of the dungeon, we move straight on to preparing the next expedition: "Two months pass, and your wounds are healed. Assemble your new party! What's the plan now?". As the megadungeon will have many entrances, there should always be a different approach worth trying - whether that's launching a diplomatic mission to attempt to recruit another faction to your current cause, attacking from a different direction or hiring a squadron of stone-masons to block up some of the entrances of the dungeon altogether.

With the lights out, it's more dangerous ...

I've also been considering some other implications of my previous posts. Most obviously, the continuity conceit of the last lantern-bearer won't work if many of the PCs have infravision. So perhaps all PCs should be humans. That frees up dwarfs and elves to be villains, which is just as it should be.

Then there's the presence of pack animals. I want these to be essential for expeditions to the megadungeon, for realism (food, blankets, water), to simplify encumbrance considerations and to allow for the removal of large items of treasure. They do, of course, make the party more visible, noisy and exposed - but I think that can be turned to the party's - and the game's - advantage too. If you're pursued by angry dire wolves, you might think about hobbling your mules and abandoning them to their awful fate so that you can get away. That's one option that the last lantern-bearer often has - and it's one reason that he always gets away.

The danger to mules also means that it's not only monsters that move around the dungeon, but treasure too. That provides a great boost to emergent narrative, I think. If the dire wolves dragged down your mules outside the hobgoblin stronghold, what has happened to the golden idol you looted from the troglodytes? The hobgoblins probably have it - but what have they done with it? Could you somehow play the vengeful trogs off against them? Or have they returned it to the trogs and forged an alliance with them as a result? Does that mean that their lair will now be guarded by chameleon-like stink lizards that you won't see until they're upon you? Or has a drooling ogre rescued the statue from the dire wolves' leavings and dragged it to his cave where he's now attempting to woo it by piling severed heads in front of it each day?

That's for the players to find out ...