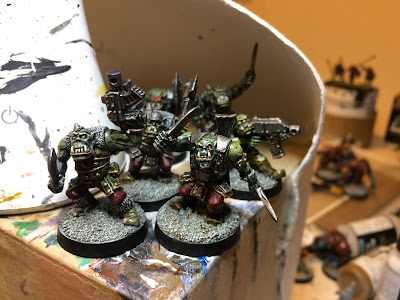 I'm not normally one for painting orcs green, although I occasionally make exceptions. But when it comes to orks ... well, why not?


These fellows are for Xenos Rampant, Richard Cowen's sci-fi variant of Dan Mersey's Dragon Rampant, which looks a lot of fun. I have a game scheduled with a few old friends in a couple of months, so need an army. That demands some extremely fast painting, so, as outlined a couple of posts ago, I'm using GW's contrast paints over black undercoat drybrushed with grey and white.

It's a very quick and sloppy technique, but I quite like how the miniatures look on the table - a bit dark and more Ian-Miller-ish than the typical "greenskin"- or at least I hope so. 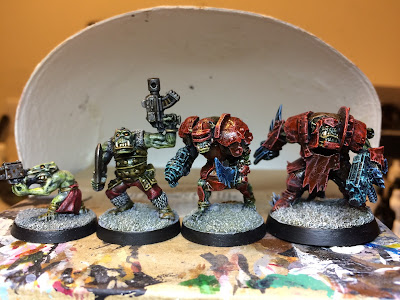 One of the joys of the Rampant family of games is matching available miniatures to the troop types. So, in the picture above we have the following: recon infantry; light infantry (possibly with the Assault Doctrine and Close Combat Doctrine options); Heavy Infantry; and Berserk Infantry (with Heavy Armour).

I'll probably add some black and white emblems at some point, but for now the focus is on churning them out. I've got 17 done already (3 recon, 6 light, 6 heavy and 2 berserk), but I want at least 6 recon and a dozen or two of each of the others). Onwards ...