The Rituals of Infinity 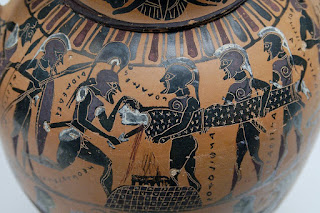 Rituals are great for RPGs. Why? Because they can go on an awfully long time. Hours. Days. Weeks, even. And that neatly avoids the problem (if it is a problem) of the quantum ogre.

Think about Conan, Valeria and Subotai sneaking into the Temple of Set. Or Indiana Jones' accidental infiltration of the Thugee cult in The Temple of Doom. Both the snake-orgy and the Kali-fest were going to go on for quite some time - meaning that they'd be underway whenever the heroes got there.

I recently ran a Dungeon World game in which an undead necromancer was in the process of animating the remains of some long-buried behemoth - the buried skeleton of which formed the "dungeon". The beast was its own tomb, with the necromancer using a shaft of moonlight shining into the vast skull to complete the reanimation.

This kind of set-up is perfect for a dungeon-bash. There's urgency: the ritual must be stopped! The captives earmarked for sacrifice must be rescued! But there's also a lack of urgency: the PCs can take their time getting there, because - hey - the high priest's here all night.

You can throw in as much distant chanting as you like. Or some special effects: in our recent game, the whole "dungeon" lurched every so often, as the long-dead landwhale stirred.
Posted by JC at 14:39