As a fairly small child (eight or nine), I used to love the ads in back issues of White Dwarf. They featured miniatures by manufactures of which I knew nothing: Rieder Design, Denizen and the Tin Soldier. The ranges were illustrated with blurry monochrome photographs or line drawings. Over the years, I'd occasionally encounter or acquire some of them second-hand, but most remained a mystery. The Great Scaley [sic] Orcs by Essex Miniatures were particularly intriguing; I recall a grinning beast seated on a boar, and perhaps an appearance in Joe Dever and Gary Chalk's Tabletop Heroes column.

Anyway, I acquired a few of them on eBay a year or more ago and painted a couple up: 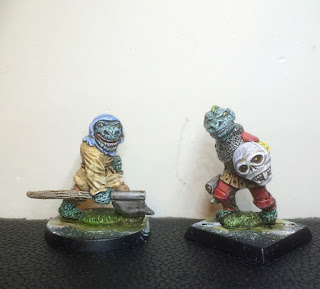 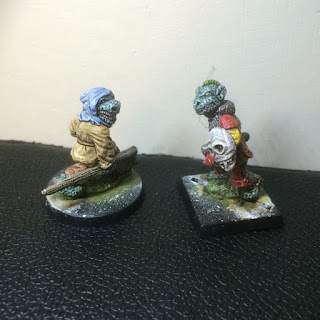 I'd planned to use them for an idiosyncratic Hordes of the Things army; the eBay batch gave me enough for six element or so, and Essex still makes the range. But tonight I realised that these utterly old-school beasties are dungeon monsters to their core. So I based them up individually. 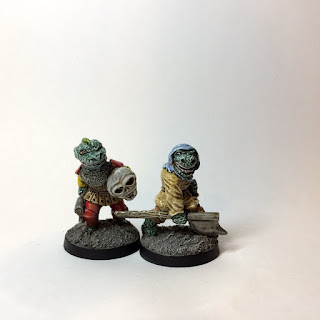 They're very far from the best miniatures Essex made. The stuff done by Bob Olley is tremendous - notably the other orcish range, Cursaa's Orcs. These I have based for HotT, which I don't regret: they're curious and very large models, about the size of Citadel's old ogres, of which I have plenty. So they're better confined to the wargames table, rather than competing with the ogres in a rather specialised ecological slot. On top of that, the Cursaa's range fit nicely onto narrow bases for "blades" elements, which provides a counterpoint to the endless "warband" elements I have based up for HotT. They look like slow-moving heavies, as per the blades profile, so that works just fine.

But back to the scaly orcs! I don't know whether I'll use these lumpen beauties as gnolls or bugbears or something else entirely (I won't call them either of those, in any case). But with their air of Doctor Who villainy and the distinct possibility that their corpses will prove to be made of papier-mâché,  I think they'll make terrific villains in the old-school megadungeon I'm developing.